As @Radish8 said, in this case you still have to pay if you want to keep it. You can only read it online until August 9th for free.

I did get the first three volumes of ちはやふる for free though. Not sure if those are always available for free or if I just got lucky.

Ahaha, your impatience has come back to bite you with more waiting

I have to post a follow up poll about the two volume thing anyway. So it’s probably fine that there’s some more time.

Actually, that’s a point - if we’re going to have a follow-up poll, won’t that delay when people will be able to start ordering things (assuming they’ll want to combine purchases)? Maybe it would be a good idea to close the poll slightly earlier than intended, and then that extra poll won’t extend the wait too much further

Ah, that works too

Context: If we only pick the top item from the current poll, we will have to vote again before we even start that book, or we will have a huge gap between this next book and the one after. Therefore, I propose that we pick two volumes to read with this poll, either two volumes of the winning manga, or the first volume of the winner and the runner up.

For comparisons to past manga, Yotsubato’s chapters ranged a lot. Sometimes they were as short as around 25 pages. Other times they were over 40 pages. Additionally, most chapters in Aria the Masterpiece are about 35 pages. Here’s some information about the manga currently in the top three places.

Now onto the polls!

How should we proceed, regardless of which two manga win first and second place? (If somehow a book sneaks into second place, we’ll probably still follow the outcome of this poll.)

Should we generally follow the outcome of the first poll?

Why did you vote the way you voted?

Is @seanblue making this too complicated?

Last poll: Other: “seanblue should know that we love polls”

Also, to add to ‘why did you vote that way’ - generally, and specifically in this case if the leads don’t change much, we tend to pick books without a strong overarching narrative for the precise reason that we’re only likely to read one volume, so I’m unlikely to feel a burning need to know “what happens next”.

Even if the volumes are short, I’d rather not commit to two volumes of something I might end up hating if I could have just read one. I’ll buy and read more if I like it myself. Plus, more variety means more happy customers - maybe someone out there absolutely loathes non non biyori but would enjoy natsume, so more people get to join in and enjoy for at least part of the time.

I voted to stick with two volumes because I worry that we’ll run out of options more quickly for future polls. I guess it won’t matter if people keep nominating polls, but in a few months it’ll only be the consistently least-popular items on the list. Plus, we’ve seen that people who want to continue in a series will splinter into separate groups.

Maybe this isn’t actually that big a deal, but I’ve been liking the groups so far and I’d hate to see it peter out…

I don’t think we’ll run out any time soon. The top four are relatively popular in the poll, one of which is a book. Just doing one volume of each of those four would take at least around 6 months.

Surely during the time the two selected volumes are being read, more books/manga will be nominated. Personally, I plan to nominate at least one book after this (eventually the group has to pick a book again, right?), and I’ll keep looking for manga that don’t require long term investment to pay off (mostly slice of life content).

For what it’s worth, people can theoretically nominate second volumes after the first one has been read, though of course that would only work for stuff that can be picked up by people who didn’t read the first volume (perhaps by just giving a quick summary).

Is there an option for “We should read the next volume of Aria” ?

Well, no one nominated it, so no.
But please do so next time.

Another PSA: The first volume of 宝石の国 is available to “buy” and download for free on ebook Japan. 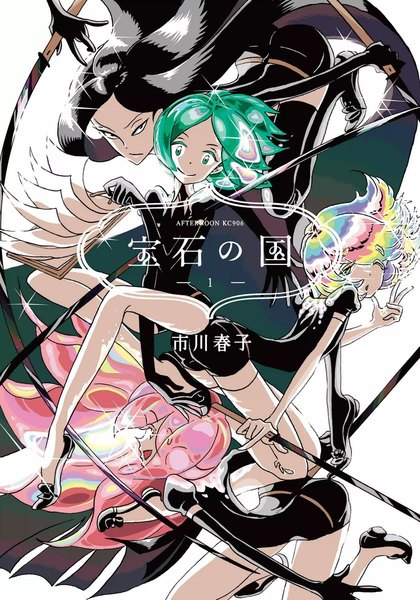 @hachiken @Naphthalene @Belthazar I do really want to keep reading Aria in a separate group, but I’m having trouble thinking of a pace that won’t feel too slow but also would leave time for me to read other things. Ideally I’d still like to keep up with some of the next picks from this beginner book club, and I really want to try to read 時をかける少女 within the next six months or so.

Pile it all on. That way, you learn to adapt, or die.

Since I ended up buying the full set of Aria, I will continue reading along if others do (I miss out on so much without the comments, so if others don’t make a group for it they will be collecting dust ^^; )
But I won’t let it affect my participation on this main group =)
Well, I’m mostly the “reads along without contributing” type anyway, so guess people wouldn’t miss my “participation”… ^^;
I’m just not good at asking questions, and my grammar is way to lacking to explain it to others =P
I’ve picked up Genki 1 and 2 though, to do something about it (will arrive some time in August) As well as physical version of Tae Kim, cause I just prefer physical books, especially one like this where I can flick through to find the grammar point I need at the time.

I would love to participate in an Aria reading club, and would want to keep up with the Beginner Book Club too (plus juggle other reading).

I think the key to making it work may be that the Aria book club doesn’t necessarily have to be actively reading at all times. The chapter / week pace works well for me personally, as at this point I feel I could easily be reading another manga at the same time (my partner may disagree, heh) unless it were a lot more difficult. One chapter / week keeps the momentum going and is easy to keep track of, but doesn’t consume all my time.

You could have gaps between volumes (larger than the book club’s usual one week), which would give people an opportunity to pursue other things. You could perhaps also take breaks, or time the between-volume breaks, when the Beginner Book Club is starting a new pick, as the first couple of weeks are always the hardest what with exposition and a new writing style. Maybe it could go on hiatus if the book club tackles a book rather than a manga, for example.

I don’t know, but I’d really love to see it work somehow!

The chapter / week pace works well for me personally

See, I don’t want to take over a year to read the rest of the series. I think I could easily read a volume in 2-3 weeks, but I don’t know if that would leave me enough time to read other material.

I could always just read ahead of course…

Ah, I see - I was going for a layered approach, because although I could probably read it that fast it would definitely make it difficult to read other stuff at the same time. I also figured I might get sick of it if I read it all in one go

Yeah, I’m not so sure how you could make that work

Right I had that concern too. That’s why I think I’d like to read a whole volume quickly, take a break, and repeat.