Having the vocab list linked in the OP of each chapter’s thread open as you read might help reduce the number of words you have to look up individually.

And if you read through a chapter (or even just a page or two) after having gone through it once, it should go a lot smoother and hopefully feel more like just reading (even if there are still words you don’t understand - that’s perfectly okay!).

Also don’t forget you can still post in any chapter thread even if the club has moved on past that chapter. I’m still planning on doing a thorough read-through of Chapter 2 (just read through quickly without looking anything up last week) before moving on to Chapter 3.

The fact that it’s painful just means that you’re learning. がんばって！！You’re not alone and hopefully I’ll see you in the chapter threads!!

Also don’t forget you can still post in any chapter thread even if the club has moved on past that chapter.

I’d like to second that. I still have notifications on for every thread we do, and I’m sure some of the more advanced people do too so you’ll get an answer reasonably quickly. Plus, asking a question that’s not yet been answered may help something click for someone else or make them aware of something they missed the first time. So definitely post there

Well I knew I’d be behind because of shipping times, but as soon as I opened the book, I was overwhelmed.
There’s one or two words in every sentence that I don’t understand.

I have to look up virtually every second word. What helps a lot is exporting the book from Kindle to html (using Calibre) and reading it from the browser with Yomichan or a similar extension. Then it takes just a second to look up a word, it shows you where the word ends and deconjugates it for you (correctly in most cases). At least the grammar seems easy so far, and the plot is very interesting (I haven’t seen the anime).

Reminder to everyone that if you want to nominate more books/manga for next time around, now’s your chance. Check out the first post to see what’s already been nominated and to see the template for how to nominate something new. Voting will take place mid-January.

It’s main target audiance might me children, but I came to quite like it. The first Manga has around 130 pages and consists of around 32 short stories which are always about daily family life and quite funny. There are lots of furigana and even I was able to get what the storys where about. So maybe someone more experienced then me might take a look at it and say if this might be an option.

Outrageous misadventures of an almost normal family with a housewife, her husband, and their two kids Yuusuke and Mikan. Wacky humor about this weird family’s daily life.

An ebook is aviable on amazon.co.jp I don’t know where else to get japanese ebooks.

I did watch the anime and trasnlated it for crunchyroll germany. First I was skeptical, but the Anime ended up beeing quite funny. I bought the first volume of the manga and it’s a fun and easy to read manga. The manga is around 130 pages long and consist of 34 short storys about daily family life.

But I don’t know if my poor heart can take reading that again! It might take me back to the poor, lonely, closeted queer I was at the time! ; p

On the other hand, I already own most of the manga.

Oops, I accidentally voted, but I didn’t even read the book. Can I retract my vote or something?

Convenience store onigiri are way too handy! Why is it that Japanese girls can call just about anything “cute?” The guys at host bars are so hot, they’re like real-life anime characters! These are only some of the mysteries Swedish manga artist Åsa Ekström discovers in this journal comic about her journey from Scandinavia to Japan, which is jam-packed with surprises and laughs! 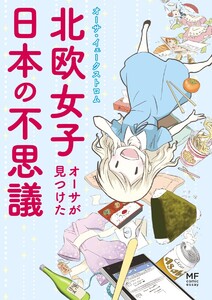 It’s also availble in original rudimentary form for free (and without the bonus material the tankobon version includes) on the author’s website, though I’d be extremely surprised if the ones on the website are identical to the ones in the book. It’s possible there’s cleaned-up versions later in the blog, but I don’t have time right now to search:

Lastly, if you want to cheat, and read it in English (though again without the bonus material):

It's a page listing articles related to "Hokuo joshi Asa." We are compiling useful information and tips for when people visit or travel in Japan.

I encountered the English version linked above first, and enjoyed it quite a bit. I feel we’d enjoy it because it’s about the experiences of a foreigner discovering Japan, which I’m sure we can all relate to.

Oops, I accidentally voted, but I didn’t even read the book. Can I retract my vote or something?

Just vote for the “I don’t know” option.

Decisions decisions. I quite liked the anime and look forward to seeing where it started (since the anime started from the middle of the manga).

You can press “hide results” at the bottom of the poll, and change your vote.

Oddly enough that’s why I didn’t watch the anime. I watched start of the anime and was like “what is thisssss all the good stuff has already happened nooooo”

aww everyone’s so supportive. Be expecting lots of late “I looked this up but still can’t figure it out!” questions with page references.

I didn’t really know much about the manga or anime when I decided to watch the anime. All I knew was the manga was made by the same mangaka who made 青い花 and that was enough for me.

I just wish it wasn’t 15 volumes, because that’ll take forever to read through!

Hmm, maybe not as long as you think. If I remember correctly (I might not) I think it tends to be kind of light on text, actually. She has a very subdued and subtle method of storytelling, where she often even cuts past what would be an emotional confrontation, in what I felt was always a really smart move, because some confrontations can’t be realistically portrayed - or if they could, they’d be so unpleasant to watch you wouldn’t want to anyway. Does anyone really want to overhear an entire argument between two 10 year olds? Do you want to hear the talk someone’s unsupportive parents have with their ‘son’?
Not really. You can imagine the important parts.

I remember respecting the storytelling a lot.

Yeah, I can understand that. From the anime alone, I really liked the way the story was told and the way the characters were portrayed. They felt more “real” than most anime characters.

I have one more I haven’t suggested yet, but if I do, 1/4 of the suggestions would be mine

Still might, but I do want the other suggestions more

I was thinking of maybe suggesting “My Hero Academia”, but think the others are better anyway.

Another one I’ve wanted to suggest, but didn’t own yet, is “Attack on Titan”
I just wanted to look, found a good deal on volume 1-27!

Bought it, and got this mail shortly after: “This book is written in Japanese. It is not English edition. Is it OK?”
I bet they have had more than one accidental buy

I might suggest it once I get it =)
Feel free to do it now if you have it (and want it), cause I won’t get it in another 3-4 weeks, which will be too late for this vote =P

My problem with shounen action manga (even more so than anime) is that basically nothing happens in the first volume. They are too slow, which is why there’s inevitably several dozen volumes.

Don’t worry, that is NOT a problem in this one!

(Attack on Titan)
The best part of the story is in the first volume, and very action packed (action that actually goes somewhere) from page one O_o
(I went to look at the English version to confirm before commenting, if anything the first volume here gives you so much it is worth reading even for those who don’t continue)

Also have much less manga specific words (some, but no where near as much as magic/ninja ones does)
The specific words are fairly relatable anyway: 巨人 (giant/person) = Titan. And some military lingo, but that is mostly later on.