Please can someone change the thread title from “seeking nominations” to “now voting” please? Thanks! EDIT - thanks @omk3!

It has always been like that, but it’s undocumented that way and might break at some point. Or so I was told

There is a detailed explanation in the Master list of book clubs OP if I‘m not mistaken, would you mind double-checking there?

That said, there is indeed that message on the main book club thread.

i.e. replace the thread title with ‘x’. This will ensure that the post is easy to edit in the future and will decrease the chance of the links breaking from updates to the forums.

It has always been like that, but it’s undocumented that way and might break at some point. Or so I was told

More specifically, it did break at one point and when I asked them to fix it the response was basically “fine, but seriously don’t use this because it might break again and we might not fix it next time”. So @ChristopherFritz you should probably stick with the way I outlined in the master list.

Obviously, I’m a bit late for nominating a book for this round of votes, but I figure I’ll get this nomination up while it’s on my mind! 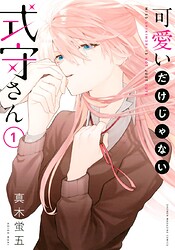 Shikimori seems like the perfect girlfriend: cute, fun to be around, sweet when she wants to be… but she has a cool dark side that comes out under the right circumstances. And her boyfriend Izumi loves to be around when that happens! A fun and funny high school romance with a sassy twist perfect for fans of Nagatoro-san and Komi Can’t Communicate !

Shikimori and Izumi are high school sweethearts. They hold hands walking home from school, they flirt in the halls, they tease each other. But Shikimori knows what she wants, and how to get it, and she can turn from cutie to cool in an instant.

I think this is a pretty good fit for the ABBC for a few reasons. It has furigana throughout (well, mostly, we’ll get to that later), text density (with at least one exception, which I’ll post in the preview) is generally manageable, and there’s no major curve balls for grammar or vocabulary which I ran into. I picked the first two volumes up when they were both free on Amazon a couple weeks ago, and I read the first volume in its entirety in about an hour or two, during which time I only had to look up a couple of words here and there. Overall, this is just a cute, fun little read with the same comfortable vibes of からかい上手の高木さん and それでも歩むは寄せてくる, both of which were previous ABBC picks. Even if this is not selected as a pick, I’ll likely continue to read the series (certainly through the second volume, at the very least!)

The first volume is currently still listed as free on Amazon JP, though I’m not sure how long that will last. If you are interested, and you use Amazon, I suggest picking it up immediately! Bookwalker no longer lists either volume as free, unfortunately.

regarding 五等分の花嫁 I have the English volumes 5-14 literally 4 meters away from me, so ping me if you’d like anything compared

Get it on the poll, looks a lot more interesting to me than a lot of the other option, slice-of-life high school romance ticks a lot of my boxes

regarding 五等分の花嫁 I have the English volumes 5-14 literally 4 meters away from me, so ping me if you’d like anything compared

Thanks for the offer! I’ll be sure to do so if I come across something that I really can’t figure out! So far, my biggest questions have all been related to stylistic choices, as opposed to having problems understanding what’s being said/what’s happening (though sometimes those stylistic choices do make it take a little longer for me to figure out a word here and there). 春場先生 sure likes to show that he knows his kanji, so he uses a lot of kanji in situations where it might usually only be a kana-only word, or in situations where a word has multiple kanji that applies to it, he’ll pick the less common option, as opposed to the more common option.

So, most of my questions have boiled down to, “Why must you do this, Haruba?”

Get it on the poll, looks a lot more interesting to me than a lot of the other option, slice-of-life high school romance ticks a lot of my boxes

I’m glad the pick caught your eye! I think that it would be a good fit here. I think getting it up in this round won’t really be doable, but hopefully when the next voting round comes up! I should have been a bit more on the ball about reading it and deciding if I was going to nominate it or not to get it in time for this round of voting, but just didn’t have the time until today to give it the attention it deserved.

I also was a bit worried that because I have a tendency to punch (quite a bit) above my weight a bit in the things I try to read on my own, that I was seeing this as much easier than it actually is, and that maybe this wasn’t the right location for it. Guess we’ll see how everyone votes on that though, eh?

I took a sneak peek since the book is free at the moment and oh my god it is so cute, I’m definitely sold.

I also picked up Shikimori when someone posted in another thread that the first 2 volumes we’re free on Amazon. I read the first couple of chapters, and I agree it’s really cute. Definitely a good candidate!

Votes are drying up. Let’s give this poll another 12 hours or so and then I’ll close it. Thanks to everyone who has voted!

Thanks to everyone who voted! Our last few picks have been manga, but this time the top 3 in the poll were all books, with Stories of the Japanese Prefectures coming out as the winner. Will get a home thread up soon!

I hope it’s ok this way? (if not, please provide me with an alternative wording and I’ll put that up).

Hmm. Suddenly occurred to me to wonder how I’m actually gonna get a hold of it. It’s on the website for my local Kinokuniya, but it’s not presently in stock, and currently you can’t place orders for books not in stock…

(if not, please provide me with an alternative wording and I’ll put that up)

Potentially worth checking out the second hand shop (if you’re still in Sydney?). They have a random selection so possible they could have it. I probably won’t read along for this as I just started a BBC book.

(Oh and I’m also stuck in the UK with covid.)

Thread is up for the next book. It doesn’t start til May 14th but it’s physical version only so plenty of time to get hold of a copy.

We read this book as part of the Absolute Beginner Book Club between May and August 2022. You are still welcome to read along on your own, and hopefully you find the discussion threads and the vocab sheet we created helpful. This book was only available as a physical book. You can try reading the introductory chapter in our prereading thread, where we broke down all the first chapter in detail. Link [61…

Also, I’ve removed Mr Miller from the nominations as it only got one vote from 53 voters in the last poll. It can always be nominated again in the future if people are keen to read it together.

(If you’re talking Sydney) You can still place orders for books from the Japanese desk in store, it’s only online orders they’re not taking. You might even be able to try via phone, but I’ve only done it in person.

Definitely interesting, and I agree with his point that reading more is better than doing more flashcards.

For me, reading a chapter three times before I can continue the story sounds totally agonizing, but I might give his method a shot with the prefectures book, since each page can be read on its own …