Sounds good. I’ll still have about a million book clubs and dozens of my own books that are regrettably stalled because of lack of time, so it will definitely fit.

Had a bit of spare time and set up a page for it:

Hello and welcome to おいしいごはんが食べられますように

[image] This is an informal reading group that spontaneously formed after @Naphthalene’s raving review. As such, we don’t have a schedule nor weekly assignments. Please join whenever you like and read at your own pace! We are planning to start reading on Dec 5th, 2022. but if you start earlier, that’s fine as well. Please feel free to comment on the book or ask questions while you read it. As we are reading at different paces, it is crucial tha…

Is there anyone here who’s a fan of 藤本たつき (Chainsaw Man)?

I started reading his 17-22 story collection recently (finished 22-26 a while back), but was wondering if anyone knows about the previous 1-16 collections? I haven’t seen anything on Verasia.eu.

Crossposting from the Natively forum, since I felt it’s relevant.

I just finished 夢探偵フロイト: -マッド・モラン連続死事件- | L30??.
I did something new for me: I listened to the audiobook while reading the text, and I really enjoyed the experience.

Speaking of audiobooks, I’ve been listening to かがみの孤城. I needed something audio-only a few weeks ago to kill some time and this was all I had. I’ve been enjoying it quite a bit. I’ve already read the book of course, but listening to it is a really different experience. It’s so well produced. Every character is voiced well, and the main character is also the narrator and does a great job. I have about 30 minutes left to finish part 2/3 of the book. Part 3 is the longest though, so I’m really only about halfway through.

I may try to listen to another audiobook sometime next year, but I’d have to find something on the easier side or read in parallel. https://audiobook.jp doesn’t seem to have many books I’m interested in reading though.

I started reading his 17-22 story collection recently (finished 22-26 a while back), but was wondering if anyone knows about the previous 1-16 collections? I haven’t seen anything on Verasia.eu.

There isn’t a 1-16.
Pretty sure the titles refer to his age when the stories were originally drawn, so if there were a 1-16 they’d have to be pretty rough… sorry if you were joking!

I read Chainsaw Man and those two collections (and those two one-shots) earlier in the year and enjoyed them! Haven’t gotten around to the most recent volume of CM or Fire Punch though…

There isn’t a 1-16.
Pretty sure the titles refer to his age when the stories were originally drawn, so if there were a 1-16 they’d have to be pretty rough… sorry if you were joking!

Hahaha I never considered this somehow, thanks!

おいしいごはんが食べられますように, and it was like watching a car crash in slow motion. The last couple of lines almost made me scream. 12 out of 10.

I just finished this one so I figured I would pop back in while it’s fresh in my mind.

What the hell was this book lol. Last lines were freaking great. They happened to be at the end of the page on my e-reader so I thought the story would continue but nope that was literally just the end lmao.

it’s hard to say whether or not I liked this book. Had nitani smashed the cake while everyone was taking pictures, shit would have been a 10/10 in my book lmao. But I dunno. Like first off, way more tame than I was expecting. I don’t fully think nitani is a weirdo and quite frankly I kinda get it. I used to work a lot powder coating with a decent commute and it worked out to where I only had like 30 minutes to my self every day to do what I wanted even with my parents preparing food. If I had to prepare food myself, basically all my time would have gone away, so I could kinda empathize with his little spiels. Had I not really liked eating in the first place and been raised in a place like Japan where there’s all sorts of expectations towards praising food and what not, I suppose I could see how one could end up like this. Something like cup noodles like he loves to eat would definitely make it feel like I have more control over my life and time. Regular food and expectations and time requirements that surround it would definitely feel very restraining and like it has too much control over my life. I honestly get the food part. But apart from that, I mean I don’t really relate or understand him. The bullying was not as intense as I was hoping but not nothing. Honestly I dont hate any of the characters, even the MC. The “yappa suru?” Line was an oof and I don’t exactly like him, but I don’t feel negatively towards him really. Same with oshio and ashigawa. They all had points I vibed with and points I didn’t really, but I didn’t feel strongly about a single person and I think that was the problem. The story was basically all in the characters and I really didn’t care about any of them lol. Am down for nitani suffering for the rest of his life though. He mentioned how time until retirement would fly by. Makes it all the better thinking about how eating ashigawas cooking every day might not only make him suffer, but make it feel like his entire life is being dragged out

way more tame than I was expecting

Honestly I dont hate any of the characters, even the MC

Do you mean 二谷 or 押尾? Both are the MCs for me… The yappa suru, though, oof indeed. Although it was pretty obvious where things were going up to that point, what with going to 二谷’s place and stuff.

Literally all the problems in this book could have been avoided if people were better at communicating.

I think you asked me before, but no. I don’t think I finished the first volume either. There was a promotion on Booklive that extended the free preview to the 50% mark, if I remember correctly. I haven’t felt the need to read more beyond that.

I ended up reading the first volume in full today in an attempt to reach 100 活字 books this year.
It was… pretty much how I expected it would be from my earlier feeling. It felt pretty slow, but it was alright for a light novel. I’d give it 6/10 overall. Would probably not read it other than to meet my reading goal

I kinda liked that (not really a spoiler)the main character has a supporting role rather than being the frontliner. I didn’t like that the main love interest is literally 15. At least, he told her she is too young, so there’s that (but they kissed already?

50% points back sale for many Manga Time Kirara series on Amazon right now. As usual, other sites probably have the same sale. Strangely, some series only have middle volumes on sale instead of the first volume. Here are the ones I recommend with the first volume on sale.

Conveniently the exact next two volumes of New Game (the series I’m reading now) were on the sale! Some other series on my wish list are on sale too, but I haven’t decided whether to get them.

As usual, other sites probably have the same sale.

From my purchase history:

Every time I see ハナヤマタ, the opening theme from the anime pops into my head. It’s such a catchy song! 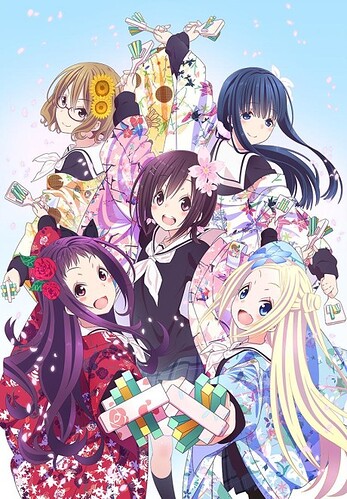 Do you all think that a thick doujinshi should count as a volume of manga? I can’t quite decide and I’m hoping for some thoughts. Normally I read JoJo, which is about 185 pages per volume and I’d say it’s medium text heavy. On the other hand, I also read most of Ojisama to Neko, which was more like 135-140 per volume and on the lighter side. I’d say this doujinshi was on the lighter side of text density, but moderately challenging due to more philosophical conversation. It was 122 pages, so I think shorter than any other typical manga I’ve read so far.

I think you should compare the reading time and decide from there.

Hmm. I didn’t track it. I read it all in one sitting but I think that’s a combination of it not being very tiring to read and also my drive to finish it because I was curious when the warning would come up and by the point I reached that, I didn’t have much left.

For reference, I’ll also read 500k-1mil word content in English in one sitting if it evokes the same curiosity and drive for me.

Thank you everyone! I’ll count it

I just finished 記憶屋, which was recommended to me by @eefara and that was one hell of a ride for me. Now, looking at the comment on bookmeter, I see a lot of people saying that the horror element is very mild (if present at all). I would agree, except I have a strong phobia of things like memory loss or going crazy (or even just thinking one is going crazy), so I was violently shaking for about 2/3 of the book

The thing that really got me through was that the main character also hates memory removals (with good reason) and is hunting down the titular 記憶屋 for that reason. That really made me root for him hard.

Also, according to Natively, it’s a series? What the heck? The story is over, though?
A quick check through the prologue of volume 2 shows that different characters are involved, so I don’t think I will read it.

@DIO-Berry It’s basically the size of an one shot volume. Although the larger print volumes typically have less pages as well. I saw that with 雨と君と and シロクマカフェ -Today’s Special- for example.

Ah, thank you! It’s A4 size as well, so that might play into it