If it gets better before the end of volume 3, I’m still saving money

I think I’ll be able to go through my yotsuba collection if I keep this pace up.

Me: I’ll try to reduce things I’m doing at once. Only one novel at the same time!
Also me:

I also finally counted my first game in Japanese this year (Story of Seasons) as finished. As usual with farming games at the beginning I’m saying to myself I’ll befriend all the villagers this time, but then I lose interest. With this one I’m mostly salty about the fact that there is a secret character you get to met only when you choose one specific bachelor. Seriously?

It totally killed my enthusiasm, because I felt I can’t max everyone anyway unless I pick this one character.
I did saw ending credits two times, tho

Now to finish Disgaea 6 before another farming game (Rune Factory 5) comes out!

Well, volume 2 was better, at a solid 7/10. Still a bit weak, but that’s enjoyable enough. Plus, it adds a lot of details that the anime skipped and make much more sense. It also makes some of the design decisions of the anime more interesting, like how in the anime the fight against the giant squid was simply solved by Maple poisoning the sea. “綺麗な海をー 毒の海にー！” thus killing the boss. In the book, the life bar of the boss goes down very slowly, resulting in an endurance fight (not getting killed before the boss dies). The anime version is much more funny and really puts emphasis on Maple being stupidly strong.
Anyway, it’s the first time I find a series where I find reading the book and watching the anime interesting. Not really at a level I can recommend from a literary standpoint, but if anyone likes VR games and want to unplug their brains…

The more I say I won’t spend so much time reading garbage, the less I seem to manage to do so.

I only played RF4 in English, so this sounds promising 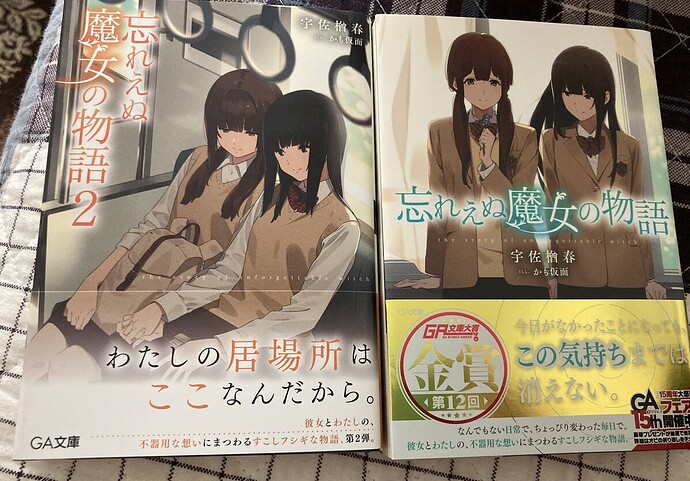 It only took a month for them to actually ship ‘em

I thought you meant “ship 'em” as in the characters.

Pfffftttt
No Kinokuniya just forgot about me for awhile

So here’s what I’ve read this year so far.

Now, an important question: do visual novels count as novels? Asking for a friend…

The second book, however, was boring as hell. What little plot there is is very slow to come and underwhelming. However, I’ve heard it gets better after that so I’ve still bought a couple more volumes.

Ironically the third book in the series is called 涼宮ハルヒの退屈.

Well I sure hope it’s better anyway, not that it’s a very hard bar to beat…

The second book, however, was boring as hell. What little plot there is is very slow to come and underwhelming. However, I’ve heard it gets better after that so I’ve still bought a couple more volumes.

Yeah, Sigh is not my favourite story, and I was a bit unimpressed that they decided to adapt that one for the second season of the anime when there’s several far more interesting stories still unadapted (especially coming off eight episodes of Endless Eight). However, it is noteworthy in that it marks the only instance in the entire series of Kyon actually stepping in to stop Haruhi doing something - and to think it only took her getting Mikuru drunk.

I just finished 狐笛のかなた. As people in the book club know, I found all of chapters 1 and 2 to be painfully slow. Which is a shame since the prologue, chapter 3, chapter 4, and the final chapter were all pretty good. You can tell throughout that the story is really targeted at younger kids. The setting and story is really simplistic, but overall the story was satisfactory, and I liked the ending.

I just started adding manga reading to my Japanese studies, so I want to lay out a plan here for the rest of the year.

ふらいんぐいっち (8 volumes left, considering the 10th volume that will come out)

This has been a great entry for me. I love slice of life, and after finishing the anime of Non Non Non Biyori, I had a big hole in my heart. Flying Witch definitely fills that. I read through the first two volumes in about ten days, really enjoyed it, and learned a lot. Thanks to everyone again who contributed to its reading club!

I watched the anime adaptation before but heard that it only covers a small portion of manga, and it is unlikely to get a second season. So, I’m really excited to get into it to see more.

I will also stick with the absolute beginner and beginner bookclubs so I guess it makes 8 more volumes until the end of the year.

That makes 28 volumes in total. I don’t know if this plan is too ambitious or if I can read as intense as I did in the last two weeks, but wish me luck! 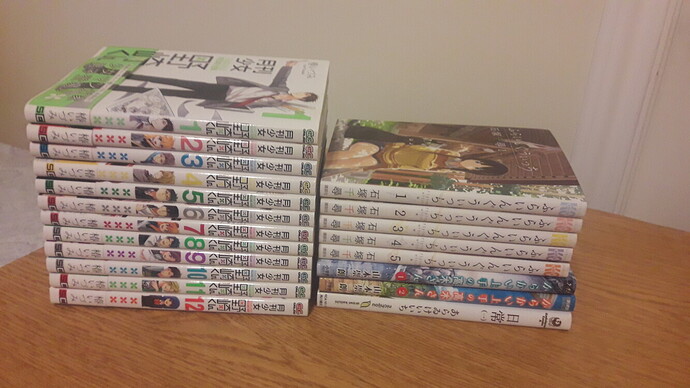 Two books later (that is, volume 3 and 4 of 痛いのは嫌なので防御力に極振りしたいと思います), the quality remains stable at 7/10. With that, I have also reached the end of the anime.
It’s interesting that the adaptation was fairly regular with 3 episodes per book. However, due to the time action scenes take compared to plot, they had to drop a lot of things from volumes 3 and 4. A lot of chapters ended up as a few frames in both the preparation montage for the 4th event and the end of said event.
Over all, I feel like the adaptation was pretty solid (not that I know much about anime in general, though). Now I know why メープル’s VIT is nearly 10000

I finished re:zero 3 a while ago, which takes me to the part I haven’t seen the anime onwards. However, I feel I at least need to take a break and read something a bit lighter. Or maybe I just give up, because at the moment I can’t really stand Subaru

So much kadokawa stuff on sale at bookwalker. I’m tempted to buy a few whole series, since many are basically half price at 330 yen and you get 135 coins back. Insane value. Even though I don’t know if I’ll like the series or find the time to read it

So much behind on Kimi no Na ha. I’m starting to think I just can’t find motivation to read stuff I already know the plot of… Book club is also getting really quiet; I feel a bit bad I haven’t been more active commenting.

Or maybe I just give up, because at the moment I can’t really stand Subaru

I think volume 4 was the hardest to stay motivated for, for me. That got better half way through volume 5, at least.

We’re not supposed to like Subaru at this point in time.

at this point in time.

well, you already know my opinion.

I agree that volume 4 was the worst though.