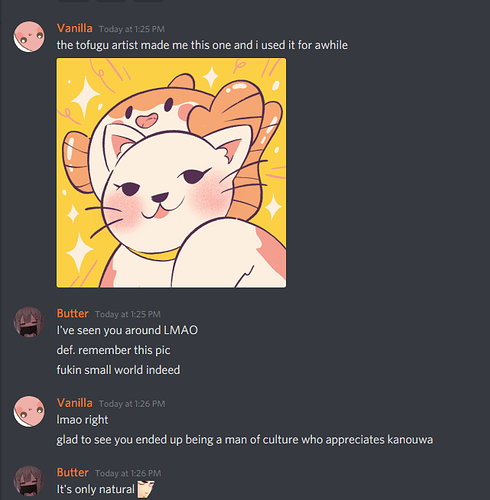 Uhh, mandatory army re-training for the whole week. Been a while since I did my service. Let’s see if I can get any reading done this week (or sleep, for that matter).

I weep for my Anki reviews.

Late (?) for ハメフラ 11 as well, but got to read it finally (well, mostly I was kinda reading other stuff, like かくりよの宿飯 instead but anyway).
Finally progress on all fronts! (cue wall of spoilers)
カタリナ realized that love is actually a thing that can happen to her and she has to search her feelings; she talked about that with both ジオルド and キース (also she saw マリア get invited for a date and wondered for half a second why she felt sad about that

); we know how much time there’s left until the end of the game; she can finally use dark magic in a useful way.
On the negative side, it was mostly a デューイ plot this time. Like last time with whatshisname, that character is not a love interest of the main character, so meh don’t care. Also, the action scenes were a bit flat.
セラ: I’m gonna mess U up. *attacks*
カタリナ: *deflects (nice!)* Actually let’s talk what are your hopes and also dreams
セラ: No… no one ever wanted to know about me before what are those feelings kyaaaa *flees*
Me: what.

Edit: now I have the song “Sera was never” stuck in my head.

Finally progress on all fronts!

Progress! On all fronts!

Progress! On all fronts!

Yes, that’s especially reassuring after volumes 9 and 10 where the status quo was strong.
In particular volume 9 is basically a standalone; I liked it but it did not provide anything to the overall story.
Anyway, hopefully some more things will happen in the next few volumes. I guess the next one will be in 6 months or so

I’m working my way through 大海原と大海原 (1) nominally with the upcoming ABBC bookclub. I thought the bookclub started on September 1st but it actually starts on the 11th, so I tried to read ahead a little so that I wouldn’t fall behind as quickly as I usually do.

Now I’m accidentally 16 days ahead of the schedule having now finished the prologue and first chapter.

This should mean I’m on track to hit my target of finishing my first 3 manga this year.

I’m done with the move and hoping that my new place’s air conditioning and comfier chair will only help with reading plenty!

Thank you as always for these! I love that photo of Miyu! It’s always fun to see her in street clothes because she’s so amazing in the ring, it’s hard to envision her as just a normal person, haha!

And yeah, Kiyomiya had some rough luck in matches over the past couple months. He got busted open pretty badly at least twice. Very alarming if you’re someone like me who has trouble with blood

It’s interesting to hear about the reasoning for their cover choices. I’ve heard people talk about how shupro covers tend to be indicative of politics in terms of how different companies are positioned within the industry, so it can be interesting to see shifts over time. I feel like this year, I’ve seen quite a few more non-NJPW covers, but that might just be because I have greater awareness of non-NJPW companies now, and I’m also paying more attention to NJPW’s position in the industry, because I’m curious if Japanese fans are perceiving their recent booking decisions as negatively as western fans are.

I love that spotlight on Unagi’s costume! I’ve always really enjoyed her gear because it’s so colorful and visually interesting. Even when she was a pretty new rookie in TJPW, her gear stood out to me.

Also, apparently Kota Ibushi had an interview in a recent issue, leading up to his match with Tana for the US title. Do you happen to have that one? If you do, I would love to know what he says in it! A Japanese fan I follow on twitter mentioned that he talks about his heart in this interview, and I’m always interested whenever Ibushi discusses his feelings.

Also, apparently Kota Ibushi had an interview in a recent issue, leading up to his match with Tana for the US title. Do you happen to have that one? If you do, I would love to know what he says in it! A Japanese fan I follow on twitter mentioned that he talks about his heart in this interview, and I’m always interested whenever Ibushi discusses his feelings.

Looks like even if I weren’t very behind, I’d be pretty behind - the most recent issue I have looks to be from early August and it mentions that Ibushi/Tana was signed. Maybe next issue though, I’ll keep an eye out!

I haven’t really been reading much lately(in fact I haven’t finished a single book for the entirety of August and the first few days of this month, though I did play both 大逆転裁判 games during the summer) but the tenth volume of 安達としまむら was just released and… It turns out I kind of ended up finishing the whole thing in about a day

Even if it starts pretty slow, I’d still say the series as a whole is one of my favourite things I’ve read so far(a big part of that is that it does a lot of things I want it to that not many other books do though, so my reasons for really liking it are obviously not necessarily something that would apply to everyone).

I liked basically everything about the new volume too - the stuff about Adachi and Shimamura moving in together as adults and about their second valentine’s day in high school was all pretty great, and Shimamura actually properly talking with Tarumi was also a long time coming(with this Shimamura has now told two more people than Adachi about their relationship, which I can’t help but notice is(obviously intentionally) kind of contrary to her own thoughts about stuff from earlier volumes). As a whole I’d say much of this volume was about giving time to show off the growth the characters have gone through in earlier ones, Shimamura in particular, which was actually really nice even if nothing particularly “important” happened outside of the conversation with Tarumi. 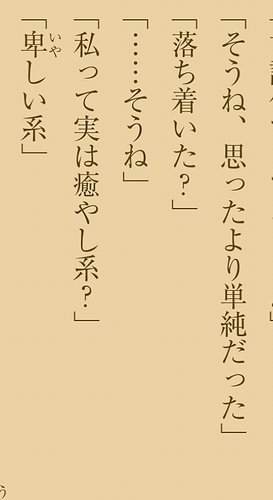 There are currently some sales on Amazon for those interested.

Finished bunny girl senpai a week ahead of schedule. I think my reading speed is finally starting to see improvement. Gonna move on to 京都寺町三条のホームズ vol. 4 and probably stick with the three week pace this time, since I want to try and get some games in this year as well.

Finished bunny girl senpai a week ahead of schedule.

All of it? How did you like it compared to the anime and movie?

I’m still fighting with Edogawa Ranpo’s 怪人二十面相 and want to move on to 赤いカブトムシ soon, because it uses way more kanji.

Also, has anyone heard of the 天空の扉 manga? I found it a couple of days ago, but the only info is Amazon and no database I came across has anything on it.

All of it? How did you like it compared to the anime and movie?

Just the first book; the anime is based on the first four and the movie on the next two. Each book has a different title and only the first is actually called 青春ブタ野郎はバニーガール先輩の夢を見ない; each other one is named after the girl it focuses on.

I already liked the anime quite a bit (haven’t seen the movie yet) and the first book was overall better imo; the show kept all the important bits but there were some details that would have been tough to adapt and as such were a nice bonus when I read them. Definitely planning on continuing the series after this.

Have you guys seen a lot of typos in published books? I have seen like 3 in the past couple months now and I feel like thats like…a lot. I don’t ever remember seeing one in an english book.

Have you guys seen a lot of typos in printed books? I have seen like 3 in the past couple months now and I feel like thats like…a lot . I don’t ever remember seeing one in an english book.

Does “printed and scanned” count? So stuff from Aozora Bunko, for instance?

So far I’ve seen no typos, but at least 1 consistent use of a weird, uncommon rendaku for 一つ一つ.

I don’t know why I said printed lol, I meant published. Them p words can get pretty confusing.

I’ve seen a few, I’m pretty sure - here and there. It happens! In English too.
I think the level where you’re confident enough to spot mistakes but still reading closely enough that something being slightly off matters has gotta be pretty much ideal for spotting them. I think it’s just a lot easier to completely gloss right over them in your native language.