OOOOH HECK new oreshura volume came out yesterday and that cover is ominous. Could it finally be coming to a close?! Right when im in the middle of trying to clean up my unread books, this happens?! I just finished tomato tenshi 3 so I guess I can read this one real quick…

EDIT: I bought it and there’s a bad word ;w;

I finished something I’ve been reading in the background that’s wrestling-related but isn’t a magazine - a pro-wrestling dictionary called, as you might expect, プロレス語辞典.

It’s a dictionary format, but it’s got an easy-going presentation with a lot of illustrations by Taiki Enomoto and DDT wrestler and president Sanshiro Takagi is listed as 監修. It was one of the first few books I bought, I think, a few years ago. I was barely reading still, and hungry to read more about wrestling from Japanese sources, so it seemed like it would be a perfect fit.

Unfortunately, in practice it wasn’t exactly what I was looking for and I wouldn’t really recommend it, except maybe to wrestling fans diehard enough to look past the drawbacks (so, @fallynleaf , maybe).

Somewhat generously since I skimmed it and there’s lots of illustrations, I counted that as prose in the lists for the thread, which means I’ve hit my listed goal of 12 for the year! Pretty gratifying considering that unless you count graded readers, my number in that category for years prior would have been 1 after a whole lot of 0s…

Is it just me, or as series go on does the author tend to use fancier words in a lot of cases? I feel like overall reading gets easier because I get used to the writing, but it feels like authors start wanting to spice up the language after a few volumes for whatever reason. I mean, im hella down for it, but I can’t be the only one that thinks this, right?!

The only series I’ve read enough of to comment on is 本好きの下剋上, and for that I noticed a big spike in words I didn’t know in volume 8 and that was it. And that volume involved a slight change of setting, so not all that surprising. So overall I want to say no, that didn’t happen with 本好きの下剋上. Maybe if I read a lot more series I’ll notice the same thing.

Its worth noting that I don’t have any actual proof so maybe its all in my head.

At the same time though, maybe it isn’t. Vsauce music

The words I’m referring about, to be fair though, would be ones that really just show up once so I have probably just gotten more sensitive to it overtime and am pretty biased when it comes to like oreshura, for example. For tonari tenshi and watanare, though, I noticed the same perceived spike. Imouto sae, I guess not tho. Kanouwa I know had it because the author literally just decided to start using random kanji for words he wouldnt use kanji for before like 漸く,忽ち, and all that in the 4th volume.

So yeah, I guess not all series would have had it in my experience.

I’m not sure I’ve even seen this word in kana before, let alone in kanji.

If anybody is interested in reading 乳と卵, now is the time! The Advanced Book Club will start reading it on Saturday, over the course of 4 weeks. Bonus treat: Afterwards you can tick off a box in the Akutagawa Prize Reading Challenge

I’m looking forward to this a ridiculous amount.

I browsed a little bit on bookwalker and I saw hundreds of books and manga I want to buy. It’s really hard to decide which one to actually buy.

I just finished 薬屋のひとりごと 7 and it was nice to get back to that series.
As usual, one overarching mystery with a bit of smaller stuff as we go along.
Sadly, this time around I guessed the solution from the start, which made reading a bit frustrating. The main character getting a new hint and thinking “hmmm this sounds relevant but why” and I am just screaming internally.

There was almost no 壬氏 in this volume, but when he was, he was still abusive. And yet 猫猫 seems to like him (overall) anyway? What the heck. I’m still not quite sure about what to think of their relationship. ESPECIALLY now that I have seen the cover of volume 8…

that ought to teach me to stay away from the forums late in the evening.

I still want to do a huge primer on all the ongoing series running in ハルタ magazine once I’ve caught up with or at least gotten to know all of them, but it seems like that’s gonna take way longer than it would in my head, so in the meantime here’s some I’ve read the 1st volume of recently:

Probably best to do it in batches like that anyway!

I’ve completed my 2021 goal of reading 12 books! I initially thought it was a stretch, but as my reading speed increased it turned out to be very achieavable. I’m still not that fast but I also have a decent amount of free time to read daily.

I guess I can read this one real quick…

Ok I have finished the buk

Actually, according to the atogaki there is one more book left in the series, but honestly I was fully expecting it to end with this one. It seemed like it was heading towards an end, but ey, more oreshura.

This series seriously is the definition of unexpected. Like, it fits nicely into this cliche category so you kinda think you know whats gonna happen, but it truly goes where no harem has gone before. 前人未踏 is the yojijukugo of the day.

Overall I don’t even know what I think of the series anymore. Its more just one big 何 than anything, honestly, but I still enjoy reading it so I shall continue lol.

For those who don’t care about spoilers and just wanna know what I mean: Usually, in harems the main character picks one girls and all the other girls kinda disappear from the story. In Oreshura, however, he picks all of the girls and they are on board with that, but they are all leaving anyways. Also one girl wants him to pledge abstinence for life despite having 4 girlfriends and tried to cut his dick off.

So is 魔法少女育成計画 next then?

I took a look at the pages you gave me and unfortunately there weren’t actually any words I hadn’t learned already, so I kinda took that as a bad sign and have it in the 4fun pile.

With that being said, it does actually seem pretty interesting to me, so its at the top of the 4fun pile with youjitsu. I thought PMMM Rebellion was like the best movie ever to exist and am a fan of the darker mahou shoujou stuff, so its definitely a theme that interests me. Im not sure how much its like rebellion per se, but yknow.

With this outta the way, its back to the tsundoku cleanup, though.

tonari tenshi 4 and 5. imouto sae 9-14. And then some books I’ve finished partially (like 100+ pages of) but never read till the end because I have the attention span of a jar of mayonaise like re zero and bakemonogatari. Then I gotta finish up shin sekai yori since that was my koohi book but I kinda stopped using koohi haha. 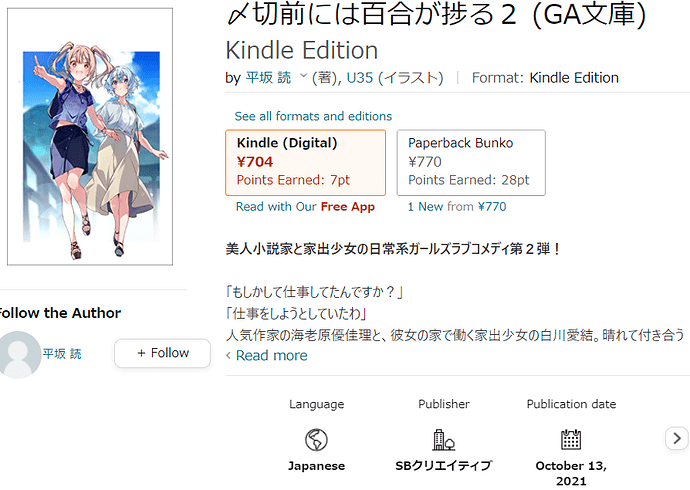 I’ll be moving to japan in a couple weeks and will be pretty busy, so if I don’t clean up my tsundoku before that book is released then I’ll get derailed again because I gotta read it ASAP. The first volume ended hella juicily.

I took a look at the pages you gave me and unfortunately there weren’t actually any words I hadn’t learned already, so I kinda took that as a bad sign and have it in the 4fun pile.

With that being said, it does actually seem pretty interesting to me, so its at the top of the 4fun pile with youjitsu. I thought PMMM Rebellion was like the best movie ever to exist and am a fan of the darker mahou shoujou stuff, so its definitely a theme that interests me. Im not sure how much its like rebellion per se, but yknow.

Ah, gotcha. I have no idea how representative the pages I provided were. I just skimmed real quick to make sure (hopefully) that there weren’t any major spoilers.

I look forward to hearing your thoughts on this once you do get around to it for fun. I still have to get around to book three myself (books two and three form an arc), but that probably won’t be for another 2-3 months.

See, the thing is I’m a MASSIVE fan of rebellion but honestly I thought madoka magica the series was kinda eh. There are a lot of differences obviously, but one thing I liked that rebellion had that the original series didn’t was Basically the presence of a main magical girl who is “evil”. Like sayaka kinda was in the original series, but I didn’t feel like it got much attention. Just the way homura became some evil embodiment of her love and suffering was so heckin

. Not sure if ikusei keikaku has a character like that, but if there is one I’m realllllly looking forward to it. Actually seen rebellion like 30+ times and now that I’m talking about it I wanna watch it again so I’ll probably do that this weekend.

But yeah, my time to read for the past few months has been extremely limited, so hopefully soon I’ll be able to read a lot more and clear my queue up. Theres a lot of books I wanna get around to and even some VNs I wanna read.

Not sure if ikusei keikaku has a character like that, but if there is one I’m realllllly looking forward to it.

Guess you’ll just have to read and find out then.

All I’ll say is that one main difference between Madoka Magica and 魔法少女育成計画 is that the latter has a large cast, and therefore a large number of different backgrounds, personalities, motivations, and goals.

Actually seen rebellion like 30+ times and now that I’m talking about it I wanna watch it again so I’ll probably do that this weekend.

I’ve seen the series (which is my favorite anime) five times now, but I’ve only seen Rebellion twice. I’ve been meaning to rewatch it, but I’ve set a rule that I’ll only rewatch anime I’ve already seen if I can watch it raw or with Japanese subs. No English subs for rewatches. So the (admittedly probably small) effort it would take to get a copy with Japanese subs (my preference over raw for now) has stopped me from doing this so far. The series was conveniently on Netflix JP (before they blocked my VPN), but the movie wasn’t available unfortunately. I’ll get around to it eventually, but it hasn’t been a priority.

Side note: You should check out the anime Mahou Shoujo Lyrical Nanoha. It’s not nearly as dark as Madoka Magica or 魔法少女育成計画, but it’s at least somewhat grey at times and magical girl versus magical girl battles are pretty common in the series. I particularly like the second season (Lyrical Nanoha A’s).