Well ahead now, but thoughts from my recent blind trip through Act 25:

On a side note, the official SM YouTube channel has been uploading episodes of the '90s anime, so I watched the first episode of S earlier, as that’s the arc I’m in in the manga. It is … jarring.

Too late for the readthrough at this point, but heads up in case this release catches up at any point:

Upcoming digital-only full-color Kanzenban release announced. No date visible, but volumes 1 and 2 will go on sale soon. Confirmation that they align with the Kanzenban comes from another photo downthread. Given how quickly digital colored editions tend to come out in Japan, it’s actually possible they’ll outpace this thread and become another reading option for it.

Interesting. Thanks for the info!

I know Naoko’s touched up the artwork from release to release, but sometimes it feels like she got bored with it and skipped a bunch of things that could be improved, then she starts it back up again a bit later on. (It can be a bit jarring when Mercury’s hair is redone in a lot of panels, and then the original art for several pages.)

I wonder if she’s doing the color for these, or if there’s a separate team that specifically does this.

I think I’ll let my physical copies end with the kanzenban, but I’ll probably get the color ones digital for a re-read in a few years.

Edit: The covers shown there remind me of the covers of the Saint Tail re-release, in that it’s clearly not even trying to resemble the original artist’s style. In other words, I’m wondering if Naoko has any involvement at all on it. Would love to know more if anyone happens across a link with info (even if in Japanese). 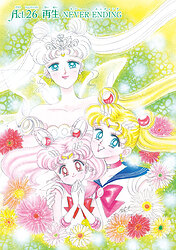 Could this be the end of the Black Moon arc already? It feels like only a short while ago that it began.

Notice: In the tankoubon release, this the second half of 「Act.23 再生—NEVER ENDING」.

There are two side-stories appears in Kanzenban volume 4. These are not part of the scheduled reading, but it never hurts to read them when you feel up to it. It’s a good chance to get to know Chibiusa and Rei a little better. (I’ll probably read them a little here and there after finishing the current week’s Act until I complete the two side stories.)

Here are the titles of these first two side-stories, and which volume each appears in:

I didn’t even realize that this short story already appeared in the tankoubon release!

(Again, based on scrolling back through, since I’m quite aways ahead now and haven’t been pacing myself at all):

Trying to understand the specifics of the space/time travel or even just everyone’s powers - both Senshi and their enemies of the week - just leaves me scratching my head every time, haha.

After Chibiusa says everything is her fault for attempting to take the Silver Crystal, Neo Queen Serenity assures her it isn’t, but … Is it, actually, in terms of causation? Story unclear on this. Was the appearance of the Black Moon clan as soon as Chibiusa took the crystal merely a coincidence, or did it give them their in?

I think I thought the silver crystal being missing caused NQ Serenity to not be able to effectively fight off the invasion, at least. Of course it’s also possible that Nemesis sensed the disturbance/moment of weakness… or maybe even both…? I don’t know if this is still spoiler worthy, but.

I keep wanting to write more, but end up not getting around to it. Perhaps that should be an area of focus for me going into the next arc: force myself to write something after each reading session. I may even find I didn’t understand something as well as I thought, giving me the opportunity to review it.

I can probably grab another copy this weekend though. Maybe Book Off has one lurking somewhere!

On S.5.212, Death Phantom uses 惑星. Previously, only 星 was used (in the sense of planet) I think. Or would we say Nemesis is a star? Anyway, what’s the difference between 星 and 惑星? Is it just more selective?

Anyway, what’s the difference between 星 and 惑星? Is it just more selective?

I hadn’t even noticed the difference in words used, but now I’m curious.

星 is defined as 「晴れた夜空に点々と光って見える天体。」 Essentially, a celestial body that can be seen as a glowing dot in a clear night sky. This would include stars and planets.

惑星 is defined as 「太陽など恒星の周りを回り、球状をなすほど十分に重く、その軌道の近くに、衛星でない他の天体が無い天体。」 Essentially, a celestial body that orbits a star (such as the sun), massive enough to form a sphere (like a planet), and…something about having only satellites orbiting near it? (Not certain about that last part.)

Considering this, I wonder if perspective plays into it. If Nemesis is something distant, a twinkle in the sky to to speak, perhaps 星 would make more sense to use? But because Death Phantom’s point of perspective was on Nemesis itself, it wouldn’t make sense to use 星.

I’m currently back to reading Sailor moon, yay! And I will at least finish off the black moon story arc before thinking of picking up something else (perhaps along side). I am finding that I’m interested in reading something that have very few look ups and Sailor moon is not quite it currently, because they never seem to spend time in school at the moment (just started act 19). I have a few other mangas that might be easier just by not having any magical setting stuff. I’ll see when I finish the black moon arc.

Anyway, just finished act 18, and it was nice that Venus didn’t get kidnapped. Nice twist after the others were all kidnapped in the chapters (partly) named after them. At least I understand it as kidnapped. I don’t know if I’m missing something or not, but I haven’t quite figured out what the baddies are doing with them. Apparently they don’t age because the moon crystal (can’t remember if that is what it is called in English…) is protecting them? If I understood a previous conversation correctly from an earlier act.

Also to note, I haven’t read through the whole thread because I wanted to avoid some spoilers. So I’ve only read about half the thread, more specifically to when @ChristopherFritz posted the act 21 reading starts post.

I’m finally back to reading Sailor Moon. Man, my relationship with this series feels so complicated. Nostalgia from watching anime waaaay back when I was a kid. And then my experience with the manga were the story often feel rushed (well the first half of each arc I’ve read so far have felt very rushed). And whenever the enemy talks among themselves or monologue, I get so lost because I basically know one word in 5.

Anyway, chapter 22 (Kanzenban). I couldn’t remember who was who among the enemy so like that was a bit confusing, but I didn’t feel like going back to when they got introduced to figure it out. Didn’t really affect the story, so leaving it for now.

So there it is. My act 22 impressions. Not sure how quickly I’m planing to finish of this story arc nor if I’ll take a break after finishing it or not. Time will tell. But later part of story arcs are probably the best parts of Sailor Moon because the story gets less rushed.

@ChristopherFritz I hit reply from your post about the chapter when I wrote my reply yesterday (maybe to link it to that part of the thread? That might have been my reasoning), and I wondered if that bothered you? Considering I’ll probably be writing up little comments and such on each chapter as I read them, I thought I’d ask before I’ve pinged you many more times.

Ping away! Getting extra notifications is no issue for me.

Act 23 (Kanzenban) now read. If I wasn’t so hungry for lunch, I would totally have continued reading.

And that is like my one big thing from the chapter.

Also liked the king’s pleading/talking with the queen, and how Diana made him feel better. #catsFTW

Also from act 22, I never caught why Sapphire started trying to kill Sailor Moon instead of keeping her alive (I think the bad guys wanted her alive?). But that was also a section with a ton of words I didn’t know, and I ended up only looking up some. I remember the verb for being crazy/going crazy was used a lot in that section. Was he mad Sailor Moon had killed the other Black Moon people and kinda lost his mind?

So yeah, kinda excited to keep reading to see how this arc ends. Although I think I have a few chapters yet to come to reach that point! (3 chapters left in the arc)

If I remember right, the first Back to the Future movie happened to have a scene like this.

Also from act 22, I never caught why Sapphire

If I remember correctly, he blames her for enchanting his brother, a problem that would certainly just “go away” if Sailormoon was gone. (I don’t recall how much he said outright versus what I read into it.)

(3 chapters left in the arc)

Three sounds like so few left to read, yet this series has such long chapters!

If I remember correctly, he blames her for enchanting his brother, a problem that would certainly just “go away” if Sailormoon was gone. (I don’t recall how much he said outright versus what I read into it.)

Thanks. Picking out the important bits get kinda hard when most of it goes over my head since I don’t read for full comprehension (that would be painful to do during those parts).

Three sounds like so few left to read, yet this series has such long chapters!