Following the fall of the Black Moon clan et al., the third story arc arrives, and with it a new thread. What new adventures await Usagi, Mamoru, and the others?

The sailor guardians have achieved peace, and can finally live normal lives again. Just so long as there are no premonitions. 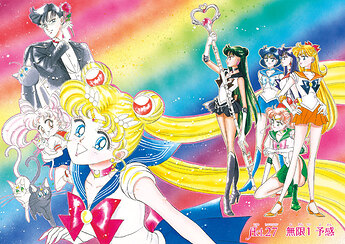 This is the first of many Acts titled 無限. Looking at the table of contents, it looks like this title’s use goes on forever.

This is the final Act in tankoubon volume 7. The story will then continue in volume 8.

Saturday: “I managed to get 18 pages in. Not bad, considering the Evil Baddie text it opened with.”

I should be able to finish up reading Act.27 in the next two days. Just have to aim for about 15 pages per day. 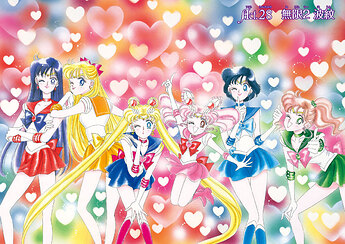 I’m feeling just a wee bit fatigued from the length of last week’s Act, but it’s a new week and a new Act, so I’ve gotta keep going! 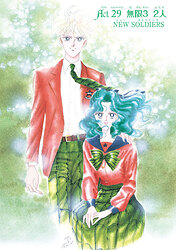 As I’ve ventured into the first story arc that I know almost nothing about, I wonder how many details I may be missing. I felt confident in my understanding until suddenly Usagi joined Chibausa in sleeping over at Mamoru’s place. Well, no time to ponder on it, as it’s another week.

I missed the new thread going up!

It seems like discussion may have died off…? I finished the series the other day, but the third arc is still something I read through within the past month or so, and I livetweeted quite a bit of it for memory jogs, so … let’s take a pass through. At least one of my favorite chapters is coming up. I’m going to cheat and bring in some links to tweets from my liveread here and there, because they were fresher in the moment than these reflections will be. Page number references are for the Kanzenban:

The next chapter is on the short-list of contenders for my favorite in the whole series–it’s insane and has a little bit of everything, and the arc is just one straight, crazy ride that never lets up from there.

This is the first of many Acts titled 無限. Looking at the table of contents, it looks like this title’s use goes on forever.

(Starting this arc, each arc will have a subtitle like this at the front of each chapter to make the start and ends of story lines clear.)

Re: attack-name questions under Act 27: Yes, “Venus Wink Chain Sword” and “Jupiter Coconut Cyclone.” I’m not sure why this first appearance adds an extra コ, as there won’t be one by the next time she uses it. (Just checked.) These are not even close to the weirdest attack names in the series.

I finished the series the other day

The power of the golden 60 circle! At about sixty days into my current WK level, I’m not certain when I’ll reach that point, but slow and steady I go.

That’s fairly expected with the club’s design. Although there’s an available pace of one chapter per week, it’s not meant for everyone to keep at that pace. Thus discussion becomes more difficult to take part in.

the Sailor Soldiers outright murder her before she has time to so much as move.

Funny, I was thinking similar. Like, they just go in and kill the enemy without a moment’s hesitation.

What’s weird for me is that I didn’t care much for Haruka to begin with due to the hair-pulling, even though I never felt the same in Aqua/Aria when Akatsuki pulls on Akari’s hair in a similar way. Maybe it’s a matter of distance between the puller and the pullee?

As for the questionable moment, that’s pretty much cemented my not really liking Haruka. I’ll see if anything happens to change that, but right now she’s on part with an Arc 2 villain for me.

That is all. Mimete, much like Eudial, doesn’t get to do much of anything before being killed off,

This is why I’m looking forward to getting to this point in the anime. Although, I’m still only near the end of the first story arc over there =(

I’ve never read or watched the third arc before, so there’s much anticipation for me.

Will this be the Act where the Sailor Guardians are finally assigned Levels of their own? 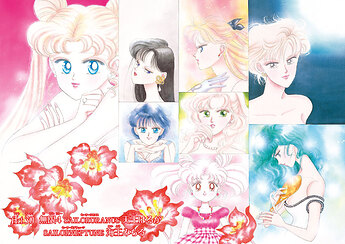 This is the second-to-last Act in the tankoubon release. The story continues in volume 9.

It crept up on me, but this is the final Act in the shinsouban release, with the story continuing in volume 7.

This is why I’m looking forward to getting to this point in the anime. Although, I’m still only near the end of the first story arc over there =(

Are you reading this alongside the original anime? I spotchecked episodes here and there while I was reading, since I was curious–thanks, official YouTube uploads–but it didn’t really seem to capture what hooked me about the manga. (Which I think is basically unadaptable, so I’m not simply lamenting that it wasn’t 1:1.)

I’ve watched the first seven or so episodes of the live-action series since starting reading, and think I enjoy that the most of the adaptations. It changes a lot, but in a way that I think still has the spirit of the manga (that is, being really, really weird while also being sincere with its characters) and is suitable for the medium. It’s definitely not executed with as much aplomb as the manga though, since it is unintentionally funny at times–namely any moment Tuxedo Mask is on screen.

The only thing more incredible about Act 30 than its content is that it’s somehow followed up by a chapter that’s nearly as good. I’m pretty sure the back two-thirds of this arc are what took the series from something I thought was “just” a lot of fun into something I actively think is fantastic, and why I stopped trying to pace myself at all and just rushed to the end within six weeks. I’m particularly enthusiastic about this and the next chapter, but in general my thoughts about the series from here out might be mostly gushing. Once every ten pages or so from this point onward it finds a way to make my eyes pop in disbelief at some plot or visual aspect, while also doing solid character/thematic work, and like, what more could you want from a superhero comic?

Are you reading this alongside the original anime?

Since I’m still on the Dark Kingdom arc in the anime, it’s not quite alongside in the series of being aligned. But I am watching all the Sailormoon. (The next episodes I have to watch are original anime ep39, Crystal ep7, and live action ep36. The anime, I’m watching in Japanese without subtitles, then later watching the English dubs, so that slows me down a bit.)

It changes a lot, but in a way that I think still has the spirit of the manga

One of my favorite things about the live action series is how the four generals are handled in it. It’s my favorite take on them.

I’ll have to hold off reading this until I get through the act (only about 6 pages in so far), but I’ve been joying reading what you’ve written so far.

Motivated by wanting to vote that I am reading along, I finished the rest of last week’s section just now. I am enjoying this arc more than the last one so far, though I care less about the new villains than the new probably-not-villains. <3

Since I don’t know anything about what happens from here, at all, I am not reading your guys’ posts, but maybe later I will come back and see what you’re saying–something to look forward to.

Does it have to be a new chapter already? I was enjoying having a chapter focused on my favorite character last week. 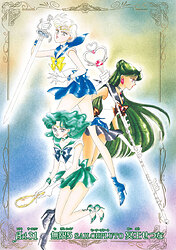 Judging by this week’s title and title page artwork, I expect a flashback involving seven Dragon Balls to show how we got here. (Although my expectation is that this is Sailor Pluto before she became guardian of the door.)

This is the final Act in the tankoubon release. The story continues in volume 9.

A fun way to organize your thoughts! I very much enjoyed reading them.

It’s a technology/magic hybrid, right? I am willing to handwave this, lol.

I definitely handwave the water thing. But the camera should be showing her from the other side!

Oh, that does sound more right!

Pages 244–246: Too much Evil Baddie talk! I’m used to the font style by now, but when reading it for ten pages in a row, it can be a bit draining. (What? It was only three pages in a row?) 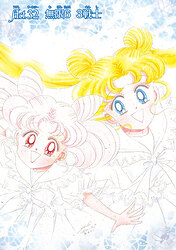 The completion of this Act will be the halfway point of the story arc! 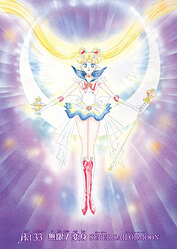 Looks like the second half of the story arc’s off to a super start.

This is the last Act in kanzenban volume 5.

An exciting section! The reading seemed to go faster than usual. 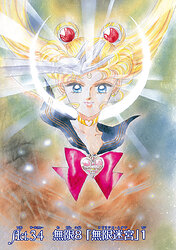 I got to the last page of Act.33, and thought, “You’re ending the chapter here and now???” I’m definitely looking forward to the next chapter.

The tankoubon and shinsouban releases are down to their last two chapters. They will continue in volumes 10 and 8, respectively.