Here’s a wikipedia article about the school Mamoru is attending: 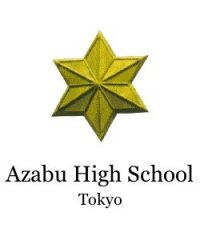 Azabu Junior and Senior High School (麻布中学校・高等学校, Azabu Chūgakkō Kōtōgakkō), referred to as "Azabu" by most, is a private preparatory day school in Japan. It teaches boys between seventh and twelves grades. The campus of Azabu is located in the Azabu district of Minato, Tokyo, Japan. Azabu High School technically consists of two institutions, which are Azabu Junior and Senior High Schools (麻布中学校・高等学校, Azabu Chūgakkō Kōtōgakkō), the former teaches pupils between seventh and ninth grades while the l...

Page 134
目印 は？
I think I get what Rei is saying before that, but even after looking up 目印 on Jisho, I don’t get what she’s saying here.

The way I read it, which is only from the Jisho translation would be something along the lines of asking for a landmark, sign, approx. location, direction. Something along those lines. Not a precise translation, and certainly there is a more exact meaning to what she is saying, but I felt like I understood enough and moved on. Maybe someone else knows better?

I know it’s not important for the context but this was still bugging me, so I looked it up in the English version. They translate it as “How are we supposed to recognize her?” So I assume Rei is asking for a “sign” that helps them identify the princess.

Back to Act 6:
I’m not sure if this was Takeuchi’s intention but I like that you can read the last line of Act 6 both as “Did you realize / become aware of (it)?” and “Did you wake up / recover consciousness?” . Even though the latter fits the context best (as Usagi was unconscious), I can’t help but think that he could be asking if Usagi realized that Mamoru is Tuxedo Mask…

I’m not quite sure what Ami is saying in the 5th panel, second part of her word bubble. I get the idea of “How does Usagi even know such a person”, or is it more like, “Usagi, you know this type of person?” In my head it’s a question, but I don’t think the grammar comes out that way.

Luna’s whole bit down here could be summed up as “WTF?!” right?

Not directly related to the chapter, but…
I mentioned to a coworker (Japanese) that I am reading through Sailor Moon in Japanese. She wants to try it in English! Every Thursday I spend some time having an informal conversation class with her, and yesterday we watched clips of Sailor Moon live action adaptations on YouTube.

This should be fixed now. Thanks for letting me know! The kanzenban release has the 「ーーあたしがリーダー！？」 page before the Act.6 title page, whereas the shinsouban release has it after. I’ll (try to) pay more attention to this.

I can hear that ちがおっっ so clearly in my head. Adorable!

I thought the same thing =D

I’m not quite sure what Ami is saying in the 5th panel, second part of her word bubble. I get the idea of “How does Usagi even know such a person”, or is it more like, “Usagi, you know this type of person?” In my head it’s a question, but I don’t think the grammar comes out that way.

Keeping in mind that Ami just commented on Mamoru’s “elite” school, I read the 「あんな人と知りあいなんて」 as “You know a person like that?” I think a key here is to accept this is the end of one sentence, and text in another font as a separate sentence. Thus, I read 「うさぎちゃんたら！」 along the lines of a slightly scolding, “Really, Usagi-chan!”, conveying along the lines of “Why didn’t you tell us you know someone like that who attends such an elite school where most students score really high on tests?”

Since I have my (incomplete) set of the English re-translation books out of storage, I decided to peak at the translation there:

And just for fun, because I also have it out of storage now, the original English monthly magazine release:

Not directly related to the chapter, but…
I mentioned to a coworker (Japanese) that I am reading through Sailor Moon in Japanese. She wants to try it in English! Every Thursday I spend some time having an informal conversation class with her, and yesterday we watched clips of Sailor Moon live action adaptations on YouTube.

The newer English translation (the first photo above) seems very well done. It’s based on the shinsouban release. There’s also an English release of the kanzenban which probably uses the same translation.

Once you finish reading Act.7, you’ve reached the halfway point of the first of the five Sailormoon story arcs! 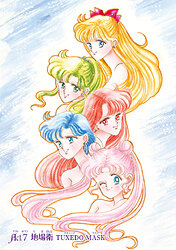 This week continues with more Tuxedo Mask. Or rather, could this be… Is Tuxedo Mask really… …?

Random aside: Anyone used to the original anime has probably noticed by now: Tuxedo Mask’s rose attack isn’t in the manga! That was added for the anime. Looking back on it, I feel Tuxedo Mask’s rose was pretty analogous to the は particle: it always signaled a shift in the context of the action taking place. 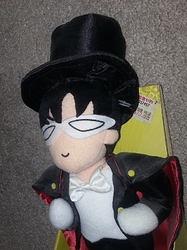 All right, we’re still keeping with the same thread for now. Feel free to keep asking any questions you may have in Act.1 through Act.6. Be sure to make use of the [spoiler] tags for anything spoilery, as some readers will still be working through earlier Acts. For any spoilery images, [details] works nicely as well.

For shinsouban readers, we’re up to volume 2. Kanzenban is up to its final chapter in volume 1. 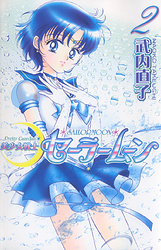 Important: Kanzenban readers, this is the final chapter in volume 1! Better hurry and secure volume two if you haven’t yet!

A tab for adding Act.7 vocabulary is now available.

Kanzenban readers, this is the final chapter in volume 1!

Wow, it feels so nice to read that. I’m really excited to start reading Act 7 and finish volume 1, it will be quite an achievement for me and I will feel great about it (comparing to how great I already feel just knowing that I’m so close to finishing one volume of Sailor Moon in Japanese!). I was sooo close buying volume 2 (ebook) already but I said to myself to only buy it after I finished volume 1, kind of as a reward.
So, time to finish kanzenban volume 1 this weekend!

it will be quite an achievement for me and I will feel great about it (comparing to how great I already feel just knowing that I’m so close to finishing one volume of Sailor Moon in Japanese !)

Been crazy busy so I’m still on Act 4

But I’m trying to get reading back into my regular schedule!! (it’s way too easy to just sit on my phone whenever I have spare time lmao)

Willpower! Write a list of things you want to get done, and then anytime you find you’re sitting looking at your phone not accomplishing anything, take a look at the to-do list and switch over to doing one of those instead =D That’s what I’ve been doing lately and it’s helped a lot (up until I moved recently, and my whole schedule’s been in disarray…)

It makes sense that her name would be Bunny in a translation, but that feels SO WEIRD to me! Was it always Bunny in the English manga, and Serena only in the 90s anime?

s. 223 I wonder if this had been published after 2008 if it would be centered on the Skytree as opposed to Tokyo Tower. Funny story, when my sister and her boyfriend (now fiance!) came to visit, I tried to take us to the Skytree but I put Tokyo Tower into my map and was very underwhelmed until I realized we were at the wrong place. Oops!

Was it always Bunny in the English manga, and Serena only in the 90s anime?

In English, the anime came first, and the manga started up only in response to the anime’s popularity. DIC Productions obtained a license for the anime, and Optimum Productions did the dubbing. Following that success, Tokyopop later licensed and translated the manga. Tokyopop chose to keep the names from the anime dub (Amy, Raye, Lita, Darien, Molly, Melvin), but decided to rename Usagi as Bunnry rather than the anime’s Serena. This was likely because of all the bunny motif (especially in her word balloons). Tokyopop also came up with Darien’s last name, Shields, as his last name never came up in the anime dub.

The newer anime dub (Viz) and manga translation (Kodansha) both retain their Japanese names, so Usagi is Usagi.

Thoughts on Act 7, so far

S.19
What does うさこ mean? Is it a nickname, kinda like うさちゃん?

Yes, it is a nickname. It’s common to tack 子 on (part of) the name of girls or “cute” things, pets, etc.

This Dark Kingdom speech is really slowing me down. Lots of vocabulary look-ups. Is it using a lot of olden speech, or do I just not know so many villain words???

One benefit of slowly reading through in Japanese is there are scenes I don’t remember all from reading this in English many years ago. I feel like I get more out of it reading a chapter over a week rather than in ten minutes.

Now to see if I can finish up the last few pages on the bus Friday before Act 8!

I’m kind of cheating through this section…

This Dark Kingdom speech is really slowing me down.

Right?! I never look forward to these pages

at least this time I found what was being said actually interesting (more about Berly and how she found this other locked up queen - I forgot the name of - and her becoming power-hungry) and the classical Japanese didn’t bother me this time (but as always lots of vocab to look up).

I tend to read any chapter in two parts, and usually I’ll pause either right before or right after a lot of Dark Kingdom because yeah, it is super slow and a lot of different vocab. So that is usually my cut off point (unless the chapter starts with it). Otherwise it tends to be any other long conversation I struggle with that makes me pause.

(Of course, I haven’t actually read Sailor Moon for a few weeks now, but I was ahead and still am.)