So I’m sitting here reading some Berserk and i come to the Scattered Time chapter. The Japanese for the title is こぼれた時間 which i figure is pronounced こぼれたじかん, but the furigana for 時間 is shown as とき. This doesn’t seem right to me but figured i might be missing something. I realize that 時 can be pronounced as と (時計) or とき (時), but I’ve never heard of 時間 being pronounced as とき.

Can anyone shed some light on this? 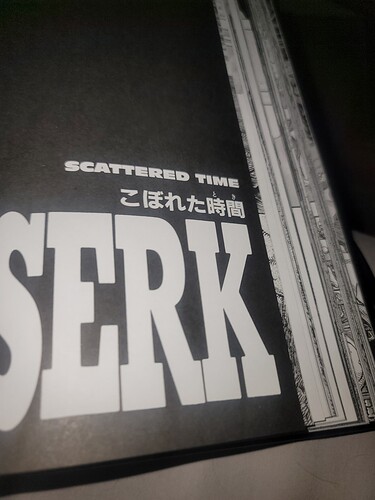 It might be written that way to emphasize how “scattered” or mixed up the time is. Usually it’s a very purposeful choice if the reading differs from the standard like that.

It’s a stylistic choice to apply a different reading to a very similar word. In that kind of situation, it’s often up to interpretation what they meant by it. Sometimes it’s just that they like the way the kanji look and the way the furigana word sounds and combined them.

I guess that would help explain why that word even has furigana. The vast majority of the Kanji in this series has none.

It’s really common in manga to use furigana to give emphasis or context to a word. Like for example in My Hero Academia they use the word 敵 with the furigana ヴィラん. 敵 is read as てき but the characters are meant to be saying ヴィラん (villain), a word that isn’t (or wasn’t) particularly well known among the readership so the author used the kanji to give context to the unfamiliar word.
It could be something similar to that?

Sometimes the furigana on the kanji doesn’t make a lot of conventional sense, but many authors play around with it as a stylistic choice. Either choosing a made up katakana name and using the kanji to express the meaning of it. Or expressing a disconnect between the spoken word and the (hidden) thought behind it. There’s many ways different authors do this.

But as a general rule, the furigana part is the actual spoken, read out loud word, while the kanji is there to express something else about the word being spoken.

But as a general rule, the furigana part is the actual spoken, read out loud word, while the kanji is there to express something else about the word being spoken.

Another example: in the song A Cruel Angel’s Thesis from Evangelion, there’s this line in the chorus:

The ‘sky’ (そら) is written as ‘universe’ (宇宙). You could interpret this as implying that the ‘young man/boy’ in the song is being encouraged to embrace the entire universe through some prophetic statement, and that it’s only described as the ‘sky’ because that’s how the universe presents itself to him: as a vast expanse in the sky above. This is obviously only one possible way of interpreting things, but yeah, so, the combination of a particular reading and kanji is meant to imply something.

Typically, in Japanese, when multiple kanji are possible for something, kanji express nuance while readings refer to a general concept. In these more creative uses, I think other interpretations are possible, but you could use the general standard trend to help you make a guess.

Lots of good explanations and examples here. I really recommend reading the wikipedia article on Kanji. It has a great breakdown of the different reading possibilities of Kanji. There are also old styles of poetry which would blend words together to fit within Tanka stanza and other restrictions. They look like jibberish but once read aloud with the right cadence, it makes sense. Because all of these aspects of the Japanese language and word/kanji-play are cognizant in most native Japanese, I makes sense to see things like this. The author found a small yet poetic was to further express the nuiance of scattered time. Legend.