I’ve just been working my way through the vocabulary for the 慢 kanji, and I’m finding it very difficult because none of the words that contain this kanji seem to relate at all to the meaning “ridicule”, and only one or maybe two fit with the “laziness” meaning. WaniKani’s explanations for the vocab meanings related to this kanji seem extremely forced and unhelpful.

After some pondering over how to make this work for me, I’ve come up with a suggestion that might help others. I’ve decided to assign the meaning “focus” to this kanji. Here’s how it works out with all the vocabulary words that contain it:

I think “fixed” or “fixated” could also work better than the current options. It just strikes me as maybe too close to “fix”, and I prefer to make things as distinct as possible.

If there’s maybe some vocabulary outside of WaniKani where “ridicule” makes sense, I feel like “focus” still could work, since people who have a lot of attention focused on them are often ridiculed (and vice versa).

As for relating the radicals to the kanji, I’ve actually assigned my own radical to the right side (“sun” + “net” + “stool”) to mean “suncatcher”. So, the sun’s light is focused in a suncatcher and fills it with a glowing soul. I’ve also worked it into the 漫 “manga” character (the first manga was a tsunami depicted in a suncatcher, maybe).

Imo, as much as I enjoyed my time with WK, I found that these sorts of issues became more common as I climbed in level, with the worst of it coming in the last 10 levels or so.

There are also several instances where a vocabulary word is given a certain English equivalent, but then is used in the one and only example sentence in a fashion that does not at all align with the given English definition. Clearly, the last chunk of levels need some revision.

As I’m working (from home) right now, I don’t really have time to dig for specific examples, but if it would be helpful to anyone, I can try to find some later.

Edit: Also, I looked up 慢 on Jisho just out of curiosity, and it too gives only “ridicule” and “laziness” as English meanings for the kanji. And yet, in French it adds " vanité" (obviously cognate with the English ‘vanity’), and in Spanish “desatender” and " descuidar", both of which mean something like “to neglect”. Having all/more of these meanings attached to the kanji in English would obviously make most of these vocabulary words more intuitive for English speakers. Quite curious.

Looking at kanjipedia, wiktionary, Jisho, etc., it seems like slow, negligent, arrogant, and ridicule are all in there for this one.
Wanikani may have picked “ridicule” to highlight for the sake of mnemonics, to differentiate this kanji from others that mean those other things, or maybe even just so you learn that meaning too in addition to those others that are conveyed by vocabulary.

I think it’s totally up to you what to pick and use for SRS from all this, and your solution is fine I think.
I wouldn’t recommend it as an official choice, because “focus” isn’t exactly the full picture and sounds maybe too… good…, but for personal use I think it’s okay!

Also informative might be the Buddhist concept that I suspect informs a lot of this: 慢 - Wikipedia
I get the impression it’s sort of like focus - but particulalry focus on yourself, which would be a pride-causing, vice-inducing detriment in most circumstances.
If we could sum that up as a unifying meaning in English, that’d probably be the thing to target.

I also checked Jisho and noticed that the English meanings were the same, but didn’t consider the other languages. That is an interesting find!

I’ve also noticed what you mentioned regarding the example sentences, but can’t remember any exact instances. Maybe I should start keeping notes of things where things don’t add up. Probably a little late for that, but as you said, it seems to be getting a bit more clunky as I get closer to the end.

“ridicule” works well for あなどる but you would normally write that as 侮る. I don’t think the meaning used by WK is very helpful for any of the other vocabulary tbqh.

It is tricky. I realize the kanji meanings are not as flexible as the WaniKani radicals, and have a lot of cultural and historical context built into them. But from a practical standpoint, in this case it just feels like an extra bit of information I have to struggle to remember because it’s so difficult to connect with the things it’s supposed to be related to. Looking at these words and processing a “ridicule” ideogram makes my brain chug extra hard to get back to the mnemonics (which I’ll maintain aren’t very good to me personally) to reach the meaning, which kinda kills some of the beauty and usefulness of even having kanji. Sure, this sort of thing happens occasionally (寿司), but here, it barely, if at all, fits any of the vocab.

The Buddhist concept info you linked is pretty interesting. That does help connect the kanji with several of the words. You’re right, though, it’d be difficult to find a concise English term to communicate that concept.

Maybe a better solution would be to replace “ridicule” with “arrogance”, as that fits with several of the words, and add “slow” as well. Even with that, it’s a pretty weak tie-in to “endurance”. And at that point, you’re not terribly far from learning a different meaning for every vocab word. Such a frustrating kanji that just doesn’t seem to want to represent one or two ideas, but a whole range of them.

It’s good to know that “ridicule” works somewhere, though just searching a bit, it does indeed look like it’s not commonly used in that context. Interesting nonetheless.

As much as I like being able to simplify where possible and ideally would rather have one word that covers every case, I’d be much happier with “arrogant” and “sluggish” than what is currently assigned. I can work one of those into every vocab word without too much force.

I realize the kanji meanings are not as flexible as the WaniKani radicals, and have a lot of cultural and historical context built into them. But from a practical standpoint, in this case it just feels like an extra bit of information I have to struggle to remember because it’s so difficult to connect with the things it’s supposed to be related to

Welcome to the last ten levels.

As much as I like being able to simplify where possible and ideally would rather have one word that covers every case, I’d be much happier with “arrogant” and “sluggish” than what is currently assigned. I can work one of those into every vocab word without too much force.

I think I did this more for levels 51-60 than for the previous 50 levels combined.

That’s why I find the “10 more levels pls” crowd so funny.

It’s particularly a tricky problem with kanji like this, that have multiple connotations in the original language.

I agree but I think your logic can also be extend to almost any kanji. When looking a Japanese Kanji dictionary even for some simple kanji like 人、we have lots of entries (5 entries for 人!). Of course, that many of these entries have some overlap/commonality but no Kanji dictionary I’m aware of is ever trying to pin-down the meaning of a kanji like WK often does. I prefer to think of the meaning of some kanji as being given by the vocabulary that uses said kanji and not the other way around. I don’t think that is wrong for WK to try to push one (or perhaps two meanings) as the meaning— this is dictated by the practicalities of running a SRS system. But I find liberating to think of a kanji having lots of different meanings. 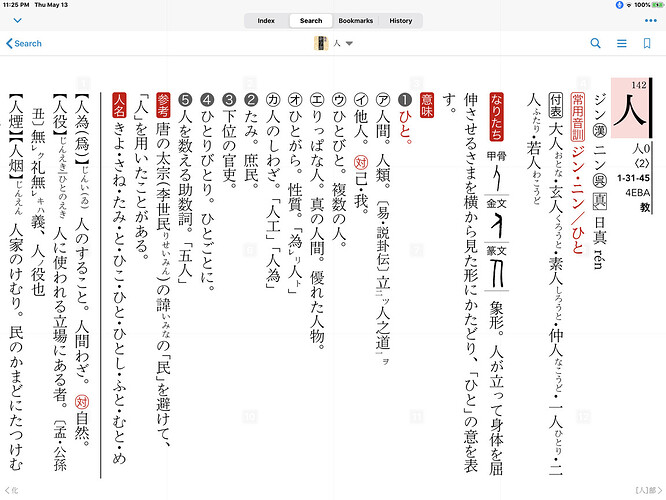 as soon as I saw your post, the first word which came to mind is 我慢