I may not make it either… I have Crunchyroll expo tix (got it pre-COVID when it was cancelled) and may go there this weekend. I haven’t decided what day though…

Turns out I’m able to come after all. Dad will be in town the next day

Have fun at the expo wether you go today or some other time.

Chapter 79 sign-up list is up. I won’t be at the read aloud, but I’ll do what I can to help with the vocab list (this is a good excuse to get out of family things

Chapter 80 list is up! I forgot it was the end of the volume.

We learn important lessons about looking before we leap this chapter. 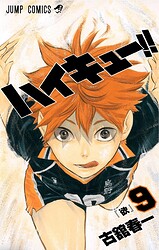 Sign up for Ch. 81 is out. Lots of talking and musing about strategy and development. And don’t miss that one signature line from everyone’s favourite owl.

We postponed reading ch.81 to next week as there would have been a lot of text with only a few people. Reading schedule got updated in first post.

Hi everyone! Big news. We’ve updated our meeting time for next week.

The following week, we’ll do the watch along for the episodes that correspond to the end of volume 9 and the beginning chapters of volume 10. Please come out and watch with us!

First post has updated time and reading schedule as well.

Not many speaking parts, so feel free to split (ex. “I’ll do Ukai until page X”)

We got some serious faces in this one…

A bit more on the tempo/timing frim an attacker’s perspective:

The gang’s all here! Lots of speaking parts in Chapter 84. Sign-ups live now.

Ch 85 signup is here. We’re heading back to the vball camp!

p.89 left side of second panel from bottom, you can already see the cat and crow fighting.

The original to the super tiny scripted dialogue of Tsukishima and Asahi at the top-right on p.124 is in Vol.6 on p.15 top-left.

As I won’t be there this saturday, you’ll get my commentary for this chapter in advance. ^^

Chapter 87 sign ups is here! Stand up to bullies, kids

Chapter 88 sign-ups is live and y’all wanna get in on this one. Yamaguchi’s about to pop off for real.