I don’t think you’re going to like this one…

NO NOT POTENTIAL FORM💀

honestly wtf even is 死蝋 in the first place😅

Adipocere (/ˈædɪpəˌsɪər, -poʊ-/), also known as corpse wax, grave wax or mortuary wax, is a wax-like organic substance formed by the anaerobic bacterial hydrolysis of fat in tissue, such as body fat in corpses. In its formation, putrefaction is replaced by a permanent firm cast of fatty tissues, internal organs, and the face. Adipocere was first described by Sir Thomas Browne in his discourse Hydriotaphia, Urn Burial (1658): In a Hydropicall body ten years buried in a Church-yard, we met with a...

Basically the stuff that fat turns into when bodies decompose. If you’re up to it an image search is pretty informative but it’s not a picture I’d want to post here.

is the little footnote abt 死蝋 or whatever saying that its formed to keep bodies from decomposing or?

When writing the above, my IME wouldn’t get the kanji for ろう unless I used 死蝋 and deleted the 死, so while ろう would be something the reader would know, 死蝋, like the English grave wax, would probably need a note to explain what it is.

oh got it ok

It’s the thing the finger is coated with?

that could be it but they didnt say anything abt it

It’s funny, I used to actively seek out stuff with furigana but now it’s harder to read since it takes up so much space. 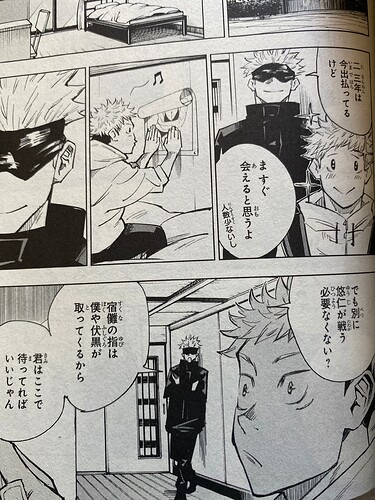