what does ~すか coming after verbs mean?

and then is っつったら a weird form of something like i said i’d … ?

thanks youre a lifesaver💀

my question is when shes talking abt the udon, how is 伸びちゃう used

My guess for the whole line is:

> even if your udon gets completely soggy, you’re the only one who can kill the monster.

I’m not totally sure since I’m not sure how to parse から here.

Or maybe “go kill the monster by yourself”

My guess for the whole line is:

Go kill the monster before your udon becomes completely soggy.

Again, this is weird not knowing the context and all, but my guess is actually: “The Udon will get soggy, so go kill the demon on your own.”

The から has to be used in a causative context here, and the だけ is missing.

But that’s just my assumption based on the information on the page.

(By the way, idk how to censore lines on here. Hope it doesn’t bother anything this early in the beginning. I haven’t read Chainsaw Man yet either.)

the chef just said that her order was ready so im assuming its more like ‘because my udon will get all soggy, go kill the devil by yourself’ maybe?

but atp theres no real spoilers so its fine

the chef just said that her order was ready so im assuming its more like ‘because my udon will get all soggy, go kill the devil by yourself’ maybe?

Yeah, I added an edit after typing before I saw you and @JustMian ’s posts.

but atp theres no real spoilers so its fine

Yeah, I mostly used the spoiler tag in case you wanted to work it out without seeing my attempt.

First panel doesn’t appear in any of those pages; without context, he’s just saying the other guy is kind.

Second panel, Aki says “Maybe my kindness isn’t getting through to you” – in the following panel he has a long speech that amounts to “I’m doing this for your own good”, ie “I’m being kind by beating you up because if I let you go ahead you’re going to get yourself killed”.

Oh, right; I was confused because I assumed it came before the second panel

. Well, it just means “you’re a kind guy”, anyway – Denji is agreeing (either actually, or sarcastically – the following dialogue will tell you which) with Aki’s self-assessment on the previous page. 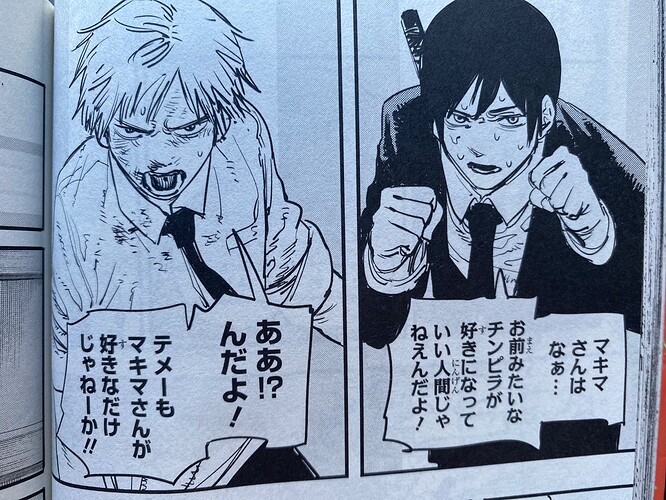 my question is abt denjis response, ik that you can use 好きなだけ for as much as you want so is denji saying ‘and you just want makima all to yourself (so you can be w her as much as you want) dont you?’ thats all i could come up with but otherwise im at a loss

hes prob saying ‘you just like makima too dont you?’ now that ive had time to think about it

is denji singing a song?

what is he even saying 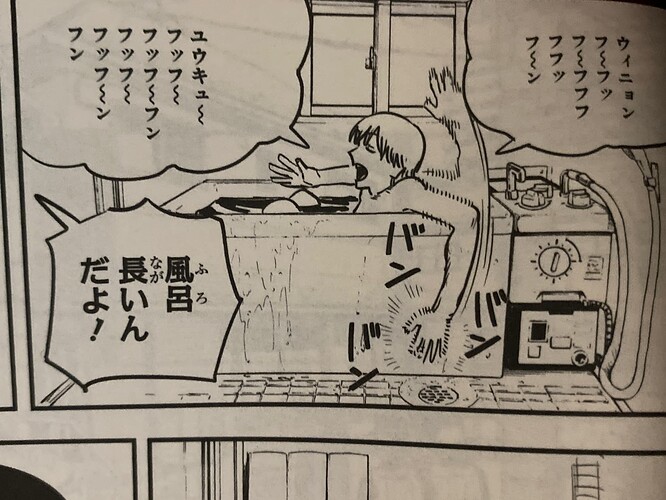 Maybe he’s beat boxing to go along with the バン バン?

I assumed he didn’t know the words but still wanted to sing along!

is he trying to figure out makimas goal just like the last two panels?

Yes, you pretty much got it all.

What you’re missing is that when he’s wondering about Makima’s goal, he starts to think about Makima, and the panel focuses on something specific, which brings him to his newfound 本気のゴール.