I take it you are talking about the で in 僕らの桃源郷である ? If so, that is because it is the literary / formal である form, which is the formal equivalent of だ. I would translate it like it’s our “Shangri-la”

You mean ‘panel on the left’, with アメリカ発のレストランチェーンで I assume, since there isn’t a で in the panel on the right. That’s just the -te form of the copula だ, linking two related sentences. Often ends up translated “and”.

yeah left💀idk why i said right

and i didnt know that but makes sense

sorry abt the confusion matskye i hadnt read that part yet, ive come across である before and that explanation makes sense

and i didnt know that but makes sense

That’s a good one to know.

Also, hello. I’m caught up with the few days I was busy.

Don’t have the right.

hide said 焼いたら but thats a conditional? my caveman brain cant compute that 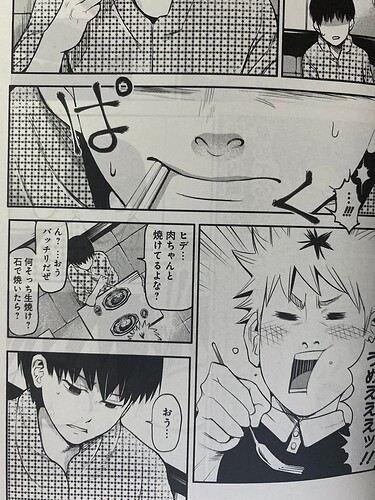 I think here the tara is used as a suggestion. Because it’s only half-baked, he suggest heating the stone up. See the second entry under “たら for Reference and Suggestion”

〜たら is a conditional form. Depending on the context, it can express time sequence like "when/after" and conditions like "if."

If you cooked it on the stone?

he suggest heating the stone up

I think he suggests baking something on the stone (石で, not 石を)

Isn’t it like, “stand up, or do you want me to start with killing Nagachika/ start from the other person/over there?”

You say break down, so do you already know the meaning?

I thought so, I suspected as much, Just as I thought, Now you are talking, That’s the spirit

i cant figure out how to break down こなくちゃ

I don’t think that’s quite right, I don’t think you can contract と思った like that, but maybe I’m wrong. Did you find this somewhere?

that’s the way it has to be

～なくてはいけない is “have to X” (or more literally: not X is no good). こなくちゃ being a contraction of that means have to [whatever 来る is expressing here].

来る in this sentence I interpret as meaning “to come to pass” essentially. The Japanese definition I’m going off is

こなくてはいけない, which means I’d interpret そうこなくちゃ as “that’s the way it has to be”

I don’t think that’s quite right, I don’t think you can contract と思った like that, but maybe I’m wrong. Did you find this somewhere?

I meant that that’s the intended meaning, since I couldn’t figure out how to get from そうこなくちゃ to that. I was at least trying to present a similarly worded phrase with a similar meaning.

ohh i get it now, ik abt the ‘have to’ meaning (that and きゃいけない do the same thing afaik), mostly confused about taking 来ない literally or not

that and きゃいけない do the same thing afaik

mostly confused about taking 来ない literally or not

You do, just not in the “physically come to a place” sense. 来る has a bunch of meanings, one of which is about things happening, like how it’s used here. Besides those two, Goo lists seven other meanings, including “to come” in the sense of time (as in “winter is coming”), or a reaction to something happening (like someone getting a joke or having an emotional response to something). I don’t think this particular meaning is any less literal than others.