Does… does this guy just casually have Tutankhamun’s mummy lying around?

Enough speculation, time to read the solution and feel like an idiot afterwards !

Whoops somehow completely missed this thread! I bought the book ages ago when Book Walker had an offer so will try and get started on it soon!

I do have a different book from the same author nominated for ABBC, but it hasn’t garnered much interest in the prior or current polls.

Unlike your manga nominations which seem to go straight to the top!

Thanks very much for all your work on this

Hear hear! Thanks for getting us organised!

Welp, guess I was wrong

But jeez, how was I to know? There weren’t a whole lot of hints in this one, were there?

I have to avoid your case two solution comment until I read that part of the book, but for the case portion, you’ve basically hit on everything I thought!

My best “wrong” guess: Papa recently took up smoking, and accidentally started a fire. Now he has to hide from his son that he’d taken up smoking.

Unlike your manga nominations which seem to go straight to the top!

One thing I did get right was that it is significant that there wasn’t a real fire in the shed. That’s the excuse the culprits used for swaddling the professor. But I still feel a bit bamboozled

Welp, guess I was wrong

But jeez, how was I to know? There weren’t a whole lot of hints in this one, were there?

I think I would have done better if I paid more attention to it being two different knife/dagger wielders at the end of the case portion. I’m going to say the lack of kanji drained my mental processing capabilities. (Yeah, that’s it.) I don’t know if I would have figured it if I carefully went back through the pages, though…

I feel like this case was overall a bit underwhelming considering its length, but it wasn’t a bad one by any means.

I do like that the わんにゃん books tend to (mostly) have more difficult cases than the author’s Detective Milky books that preceded them. (At least, the ones I’ve read thus far.)

So I completely misread the first word in the book… 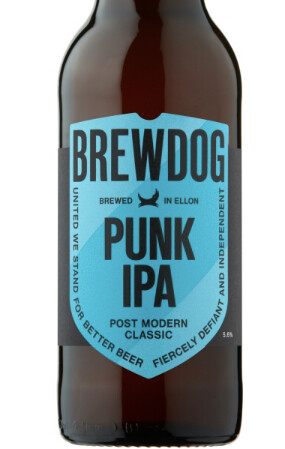 Nice to know I’m not the only one still stumbling over katakana!

Ah thanks, I missed that! Knowing what his name means he sounds even more of a wimp!

EDIT - Talking of names, these three are all named after neighbouring prefectures in Chūgoku: 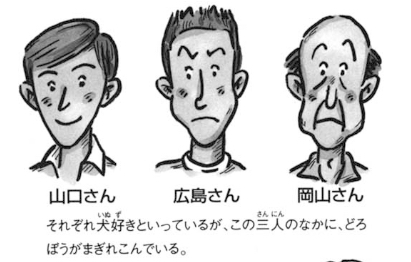 I thought this too.

I read this along the lines of: my dog’s really dangerous, his teeth are really sharp because I grind them with a file!

EDIT - having read the solution I missed all the clues too! Hints (no spoilers): One clue I could have worked out if I looked harder at the pictures but you have to look really carefully. The other big clue I wouldn’t have got as I obviously don’t know much about dogs either!

I completely missed this thread! I’ve just started to work through all the books I haven’t finished including book 2, so probably not a bad thing. I need to get back into reading but I know I’m terrible when travelling and I probably have another stint coming up.

By the way, did anyone else think Clara looks like she’s wearing a noh mask in this picture?! 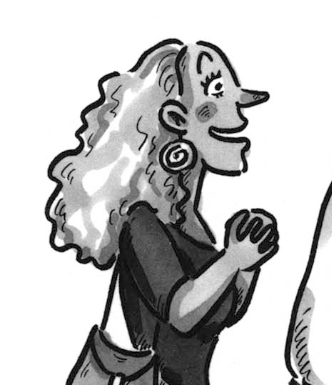