それでも歩は寄せてくる ・ When will Ayumu Make his Move? - Volume 5 Thread 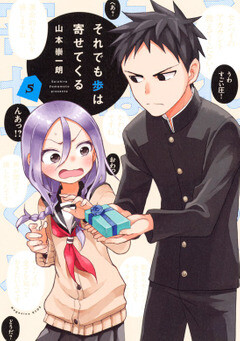 If you need any general info about the book, please check the Nomination post for more details (´｡• ᵕ •｡`) Also, note that this is an offshoot club’s thread, meaning that we have already finished reading the first volume, that you can find at それでも歩は寄せてくる ・ When will Ayumu Make his Move? - Volume 1 thread (ﾉ◕ヮ◕)ﾉ*:･ﾟ✧

それでも歩は寄せてくる - When will Ayumu Make his Move? - Volume 5

After I finally managed to read the omake of volume four …

I actually have a question for chapter 56, but just realised/saw I was not supposed to read that yet. So I guess I’ll wait with my question until next week!

I’m so glad to be back! Though, I guess it wouldn’t be quite right to say back with “these two” yet, given that this chapter focused on Sakurako and Urushi. I’m definitely glad to see more of Sakurako, though. She’s probably my favorite side character!

I actually have a question for chapter 56, but just realised/saw I was not supposed to read that yet. So I guess I’ll wait with my question until next week!

I’m glad I saw you post this before I read; I would have done the exact same thing.

I’m playing a bit of catch-up this weekend, as well, since I had marked that I was going to read along with Mitsuboshi Colors Volume 2, then promptly forgot to do so last week.

I’m all caught up now though! Well, with that… I still need to go through Chapters 5 and 6 for 寄るカフェ’s vocabulary sheet. I’ll do that tomorrow after my tutor session, though, I think. I’ve done a lot of reading today, and I’d probably just make a bunch of mistakes if I tried to do it now.

But I took that to be specific to that instance.

but I’m pretty sure she also said

This sounds familiar to me, but offhand I can’t find it.

This is a series that I was able to OCR fairly cleanly, but I’m not finding any mention of “library” or “read” aside from the following:

Maybe different wording was used, though. Or it may be the words came up somewhere that the OCR failed on.

I have a few chapter 56 questions:

Thanks in advance for any help!

That helps a lot, thanks!

You’re definitely right about コマ referring to a piece. I’ve been using Hans Geuns’ Basic Shogi Vocabulary to look up shogi terms. Of course it uses the kanji+romaji, so my search of hiragana/katakana search didn’t come up with anything. 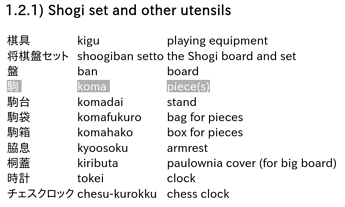 So I just went to add this to my personal list of shogi vocab that keeps coming up in Ayumu… and it’s already there, but I only wrote down the kanji.

Such is the process of learning.

I like your interpretation better. We haven’t seen Urushi corrupt words so heavily up to this point. I think I’ve spent too much time with Saitou…

I’ve spent too much time with Saitou…

Although I know what you’re referring to…

I realized I actually forgot to put this thread on watching so I missed all the discussion!

I also forgot what my question for chapter 56 was, but I might re-check later. Could be the one that was already addressed here.

Finished this weeks reading, overall it was a nice read but I got a question for p. 37:
どうも後輩の男子が自分のことを好きみたいなんだけど。

In my experience, 「どうも～みたいだ」 has a sense of “apparently”.

In other words, it seems the kouhai likes the senpai, but it’s not definite (to the reader?), so rather than saying he likes her, Urushi says “apparently” he likes her.

Looking online (which risks finding false positives), I came across this Japanese posting which says the English word “apparently” is like 「そうらしいね」 and 「どうもそうみたいだね」 in Japanese, but also mentions 「どうも～みたいだ」 as the kind of situation you would use “apparently”.

In other words: 「subjectが」 can be tricky to know who refers to, so you just kind of need to feel your way through based on context.

I’d figure since the conversation is about the main character, that’s (how we can determine) who is referring to.

なん - honestly I’m always troubled with these kind of words, so I’m not sure what the correct translation is for this.

When you see a word that normally ends in だ, such as みたい, and instead it ends in なんだ, that means it’s the explanatory の. I’ve posted an explanation and examples, based on what helped me finally properly grasp the explanatory の.